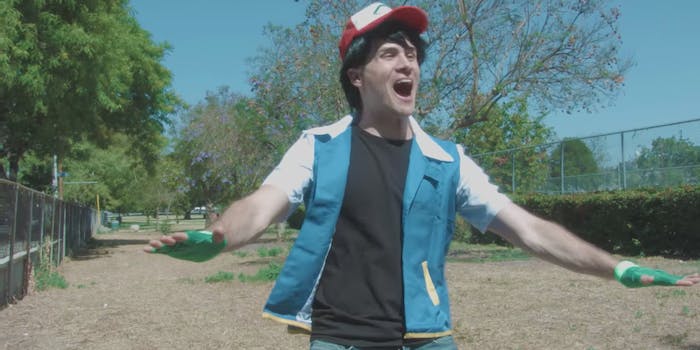 Someone, please come get your crying Anthony Padilla—he’s a literal mess now that he’s left his long-time YouTube channel Smosh, and his latest Pokémon video is proof.

Earlier this month, Padilla announced his departure from Smosh, his 12-year-old YouTube channel he founded with best friend Ian Hecox. Days later, he published a video in which he interviewed various YouTubers, including Jon Cozart, Lilly Singh, and Anna Akana, asking them how to actually be a YouTuber in 2017.

Now, per Cozart’s suggestion to “keep doing that Pokémon bullshit,” a clear reference to Padilla and Hecox’s initial Pokémon theme song video that launched them and YouTube’s newbie streaming platform into internet virality in 2005, Padilla has done just that.

In this sad attempt at a YouTuber career comeback, Padilla manages to order the wrong Pikachu costume, has a complete diva-level breakdown, and puts himself at risk of being misconstrued as a sex offender.

Padilla’s inability to even put together a simple video is genuinely astounding. How on earth did Hecox even manage to do all those subsequent Pokémon videos with Padilla at his side, we will never know! Who’s to really say how much of Smosh ended up being Padilla over Hecox, anyway(????)? And judging by Padilla’s meltdown, and his own pinned comment to his video, “See ya later bye guys press a like so I don’t have to move back into my mom’s basement <3,” YouTube has surely seen the last of this fallen star.

All sarcasm aside, Padilla’s latest video endeavor is obviously purposely bad, a clear attempt to depict himself as the fallen YouTube star who’s come on hard times after abandoning the project that brought him fame and fortune. It’s a writing decision oft used in entertainment to spice up boring storylines—take a prominent character in any sitcom and put them out on their own for the first time, showing how they stumble without their former support system.

While the gimmick might come off as, well, gimmick-y for washed up YouTubers hoping to keep their audience engaged after a content plateau, it works for a freshly-lone wolf in Padilla’s position. As he posits in his interviews with other YouTubers, it’s been more than a decade since he started Smosh from scratch, and 2017’s overcrowded YouTuber game has changed tremendously since. If anything, however, it’s just a question of how long Padilla will be able to rely on this “I’m bad at YouTube and need to rely on younger YouTubers for help” storyline before it becomes stale and outplayed.

For now, at least, it’s a reliable character for Padilla as he tests the waters in search of that “unfiltered” voice. As the saying goes, if you can’t run around an open field in a Pikachu bikini without your junk falling out, stay away from the camera.

Watch Anthony Padilla try out Pokémon by himself below: