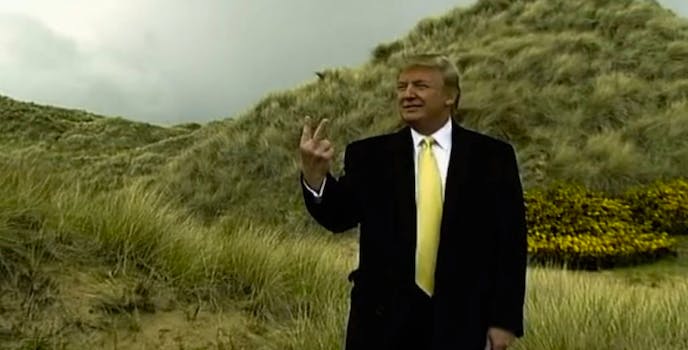 Screengrab via YOU'VE BEEN TRUMPED TOO/YouTube

Anthony Baxter’s new doc You’ve Been Trumped Too has drawn the interest of Donald Trump‘s legal team, but he might have found a loophole.

The Scottish filmmaker is attempting to get his latest Kickstarter-funded film (it follows up his previous doc, You’ve Been Trumped) to the masses before Election Day, though Trump’s lawyers have threatened to sue anyone who screens it. So he’s streaming it on Facebook Live this Thursday.

“He and his organization has harassed local residents in a way that I think people need to see,” Baxter said. “You can’t allow bullying to get in the way of the truth.”

The film focuses on the Forbes family, who refused to sell their land to Trump for the construction of a golf resort in Scotland. Trump sent out a press release on Oct. 27 to refute claims in the film, the most damning being that Trump’s resort had the family’s water supply cut off for more than five years as payback. The resort has also seen more recent legal issues.

As noted by Deadline, the film was released at AMC theaters on Oct. 28, but the chain has not confirmed it received a letter from Trump. The presidential candidate also tried to stop the showing of Baxter’s 2012 doc.