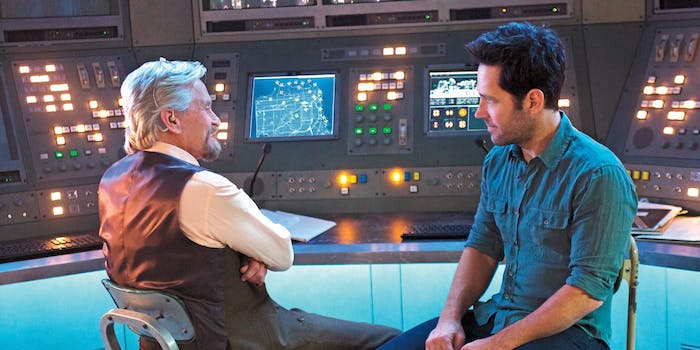 Can we still see Edgar Wright's influence in 'Ant-Man'? And if not, does it even matter?

The specter of Edgar Wright is still hanging over Ant-Man. The director quit just a few months before filming was due to begin, meaning Marvel had to scramble to find a replacement. In a new interview with Entertainment Weekly, Marvel Studios boss Kevin Feige confirmed that the split was due to that old enemy of any artistic collaboration: “creative differences.”

The image Feige wants to project is that of an amicable breakup, although cast interviews are still rather less flattering. Paul Rudd and Evangeline Lilly both signed on to make what they thought would be an Edgar Wright action comedy, in Lilly’s case without having seen a script. Instead, they found themselves working on a film directed by Peyton Reed (whose best-known work is Bring It On), heavily rewritten so the story and tone would cleave closer to Marvel’s house style. Now, Ant-Man‘s script is credited to Anchorman‘s Adam McKay and Paul Rudd, with Wright and his creative partner Joe Cornish receiving a “story by” credit.

“It all happened very quickly,” Rudd said at first. “I was devastated.” But in the new EW interview, he emphasizes the lingering effects of Edgar Wright’s influence on the movie.  “The bones of it is really Edgar and Joe. It’s been an emotional roller coaster, but I’m very excited now.”

These public disputes mean that Ant-Man is under even more scrutiny than your average superhero movie. When the first trailer came out this week, it was analysed not just for comic book details, but for signs of the creative divide between Wright and the studio. For a film that is presumably meant to be comedic, it feels oddly unfunny and bland, especially when compared to Guardians of the Galaxy. Still, that’s just the first trailer, and later clips may showcase the film’s funnier side.