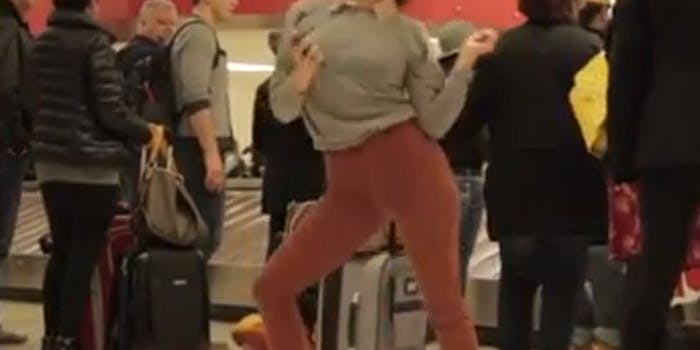 Angela Trimbur is a one-woman flash mob—and she’s showing up everywhere you’d most expect her.

Trimbur is the leading lady behind “Dance Like Nobody’s Watching: Airport,” the second installment to a Hello Giggles series that finds the Los Angeles-based actress setting up a camera and going hog-wild on a makeshift dance floor while innocent bystanders and onlookers smirk and go jaws-to-the-floor in amazement.

Performed to the tune of The Black Angels’ “Telephone,” “Dance Like Nobody’s Watching: Airport” is a 2-minute psychedelic sock hop, one that’s already been seen more than 190,000 times in two days.

The way Trimbur describes it, the performance was necessary self-therapy after a bad case of the holiday blues.

“I had a pretty lonely holiday,” she wrote on Hello Giggles, where the video was first posted. “I didn’t get to go home to see my fam this year & was really bummed, so I went to dance around people who got to do so on their way back from holiday vacay.”

“Dance Like Nobody’s Watching: Airport” is hardly the first time that Trimbur’s taken her oversized dance moves into the public facility. In April, 1 million people watched her move around a mall to the beat of Chromeo’s “Fancy Footwork.” Five months before that, a blonde Trimbur delighted 1.7 million viewers who tuned in to see her dance around a laundromat to Lykke Li’s “I’m Good, I’m Gone.”