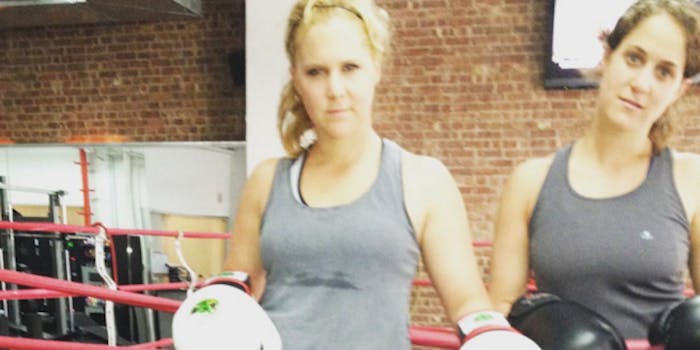 Amy Schumer turned heads Monday by posting a black-and-white topless portrait taken by Annie Leibovitz to Instagram. In the pic—which arguably harkens to that famous George portrait from Seinfeld—the comedian casually sips a coffee while lounging topless in some lacy undies and stiletto heels.

The comedian has gone on the record numerous times over the years about body positivity, the male gaze, and the impact Internet commenters can have on your self-esteem when you’re in the public eye.

In a speech at the 2012 Gloria Awards, she famously said:

I can be reduced to that lost college freshman so quickly sometimes, I want to quit. Not performing, but being a woman altogether. I want to throw my hands in the air, after reading a mean Twitter comment, and say, “All right! You got it. You figured me out. I’m not pretty. I’m not thin. I do not deserve to use my voice. I’ll start wearing a burqa and start waiting tables at a pancake house. All my self-worth is based on what you can see.” But then I think, Fuck that. I am not laying in that freshman year bed anymore ever again. I am a woman with thoughts and questions and shit to say. I say if I’m beautiful. I say if I’m strong. You will not determine my story — I will. I will speak and share and fuck and love and I will never apologize to the frightened millions who resent that they had it in them to do it. I stand here and I am amazing, for you. Not because of you. I am not who I sleep with. I am not my weight. I am not my mother. I am myself. And I am all of you, and I thank you.

This Instagram seems like a physical representation of that message: a big “f**k you” to anyone who might think the comedian should think twice before sharing a photo this revealing.