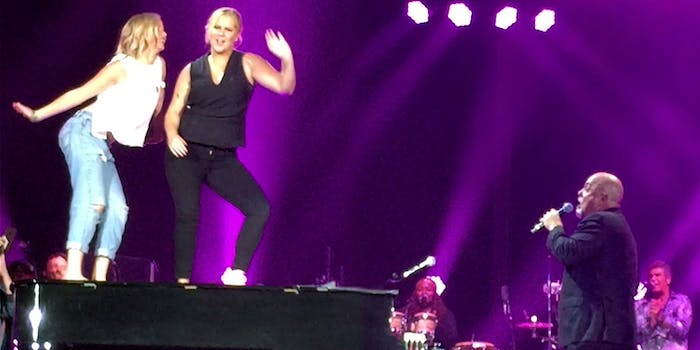 New best friends Amy Schumer and Jennifer Lawrence took their friendship to the next level by dancing on top of Billy Joel’s piano during his concert in Chicago Thursday night.

The duo, who are currently working on a screenplay together, took a break from the writing process—or perhaps a cleverly disguised bit of “research”—to make an entrance onstage during Joel’s rendition of “Uptown Girl,” a song prominently featured in Trainwreck, complete with a dance routine.

Although rehearsed prior to the concert, they easily managed to surprise the crowd with a can-can alongside Kim Caramele, Schumer’s sister, and Inside Amy Schumer writer Kyle Dunnigan.

And if that wasn’t enough, Schumer and Lawrence then got on top of Joel’s piano barefoot while he sang to the thousands of people singing right back to him while living some previously unknown fantasy.