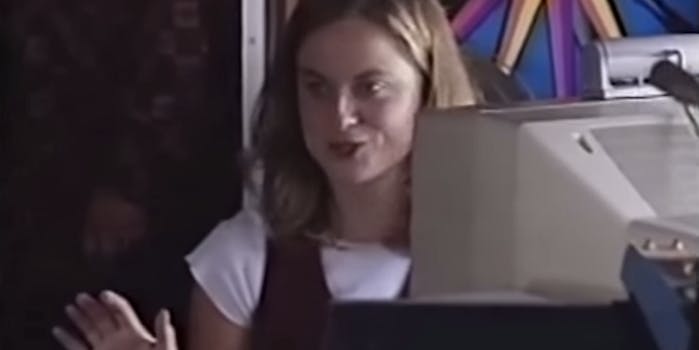 Something to fill the Leslie Knope–sized hole in your heart.

This week marked the last ever episode of Parks & Recreation, and while we’re all having a hard time withdrawing from our weekly dose of Leslie Knope, we’re excited to see what Amy Poehler does next.

Over the last decade, Poehler has become a comedy powerhouse after scoring a spot on the SNL cast and moving on to various TV and movie roles. She’s even broadened her role as an actress by spending some time behind the scenes as an executive producer for the breakthrough comedy Broad City.

It’s hard to believe that an actress with such an influence in the comedy world started from very humble beginnings. Poehler got her first taste of comedy at Second City where she shot a forgotten pilot for the proposed comedy show RVTV.

RVTV was written by Adam McKay (writer/director of Anchorman) and Tom Gianis (writer for SNL). It starred Poehler along with Del Close and Matt Dwyer.

While we’re not exactly sure what’s going on in this pilot, it’s hilariously ’90s with vests, floral skirts, and nods to the future of the Internet age galore.

24-year-old Poehler also does one of her signature raps that are always worth watching.

Check out clips from this ancient Amy Poehler pilot below.

Screengrab via The Second City Network/YouTube