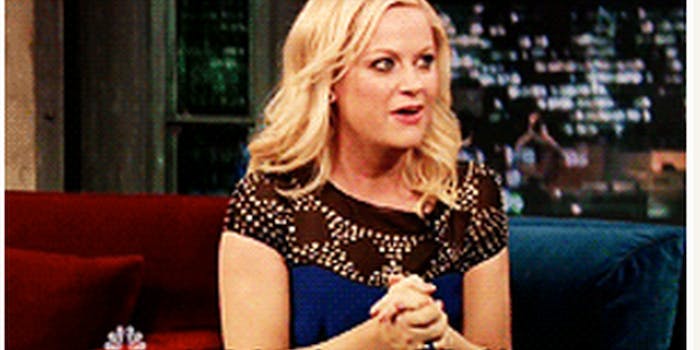 Amy Poehler should win all the Tumblr awards

Amy Poehler may not know what Tumblr is, but she may have just invented the blogging community's first award show.

If Tumblr ever creates the “Tumbie” awards, Amy Poehler should win them all.

Poehler wrote and directed last week’s episode of Parks and Recreation, which became a huge hit on Tumblr. On Wednesday night’s Late Night with Jimmy Fallon, the always lovable Poehler expressed her surprise at the community’s reaction.

“And people were freaking out on the blogs. On the Tumblrs,” Fallon said.

“On the Tumbies?,” a surprised Poehler shot back. Fallon didn’t correct her misstatement. He turned it into a fake award.

While the “Tumbies” don’t exist yet, Poehler did win a GIF of her appearance on the NBC late night show. It’s been circulating throughout Tumblr on Thursday. Created by user laughterkey, it’s already racked up more than 5,000 notes (a mixture of likes and reblogs).

Or maybe the Tumbies do exist? Mark Coatney, a media relations representative at Tumblr, wrote on his blog: “Dear Amy Poehler. Your trophy is ready. Please come to Tumblr HQ to pick it up.”

If there really is a trophy, someone should make a GIF of Poehler accepting it.