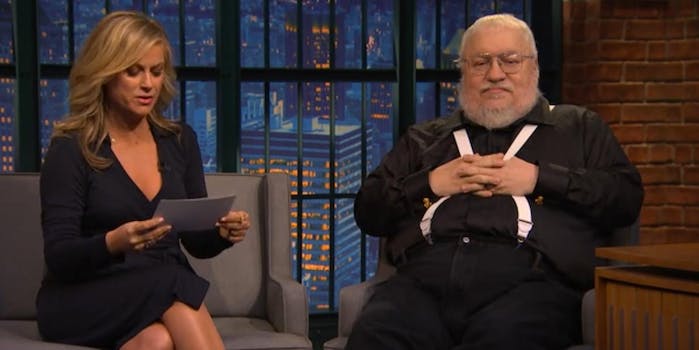 The real fun is simply watching the author laugh.

George R.R. Martin is a man of words, and many words at that. While the Game of Thrones author has penned some of the most cutting and infamous lines in pop culture, how good is his recall when it comes to remembering who said what? That’s just what Amy Poehler, a noble and blonde khaleesi in her own right, was looking to find out during her appearance on Late Night With Seth Meyers.

With the assistance of Meyers, Poehler began testing Martin’s recall. Though it was sharp, he stumbled a few times. How could the author have forgotten that Breeze Daniels, the Westeros 9 meteorologist, was the one who uttered the first “winter is coming” warning? While the author managed to fall into a few traps, the quiz wasn’t a total  bloodbath.

If you’re not a Game of Thrones fan or a Poehler fan, you’ll appreciate the sheer joy of watching George R.R. Martin laugh and wiggle at the same time.