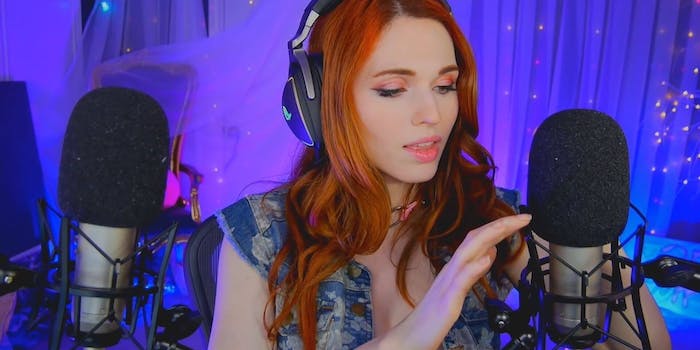 This time, she doesn't know why.

Popular Twitch streamer Amouranth, who was previously banned from the platform for accidentally flashing the camera during a live broadcast, is being punished again. She says this time, sure why.

Amouranth, whose real name is Kaitlyn Siragusa, has more than 1.4 million Twitch followers. But her page now has the telltale sign of a streamer being punished. It reads, “Sorry. Unless you’ve got a time machine, that content is unavailable.”

According to Dot Esports, Siragusa wrote on her Discord chat, “I have been told that I’m being suspended for something that happened during a gym stream last week. I haven’t seen the vod yet… Waiting for them to show me so I can appeal. I don’t have much more information than that. The longest it can be is three days.”

Siragusa, who’s known for being a cosplayer and for her NSFW content, was kicked off the site or three days in September for accidentally showing nudity. A few weeks before that, she claimed she was being blackmailed for $2,600 per month by an Instagram content moderator. She said at the time, “I am hoping more people step forward with their stories. I imagine I am not the only one.”

Siragusa did not immediately respond to a Daily Dot request for comment on Friday morning. Twitch does not comment on individual streamers’ channels and reasons why they might be punished.

Siragusa also hasn’t commented on social media. On Thursday, she tweeted a video of herself dancing in a bikini and directed followers to her NSFW Patreon page.