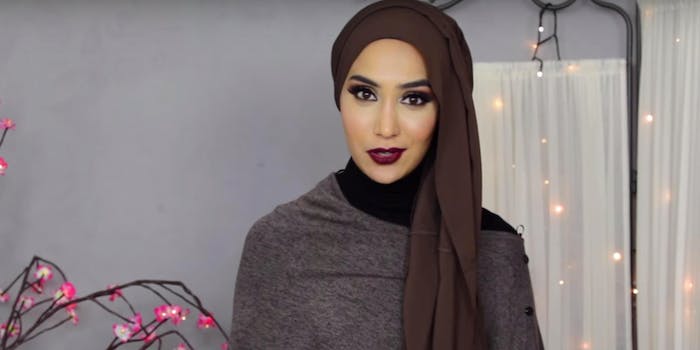 Meet the Muslim vlogger who reinvented the hijab

The first video Amena ever uploaded to YouTube, a tutorial on how to wear a pink waterfall hijab, quickly gained 2.6 million hits as viewers from around the world responded with appreciation for a creator finally making content for the Muslim community.

Since her viral hit, Amena has grown her beauty and fashion-centered channel into a thriving business, Pearl Daisy, as well as her own makeup line, Ardere Cosmetics. Amena’s channel is organized much like a lifestyle magazine, covering all topics related to living a healthy, fulfilling life.

With her 280,000 subs, the mother of two gives advice on healthy skin, travel, weight loss, clothing hauls, hijab tutorials, makeup, and life as a married businesswoman. Producing a video every Wednesday and Saturday, Amena makes a point to create both tutorials for a general audience as well as content specifically tailored for the female Muslim community, a very underserved audience on YouTube and in media.

Shortly after starting on YouTube, Amena began receiving requests about a product she created and personally sewed, the hoojab. A hood with two strips of fabric, Amena’s hoojab provided the same coverage as the traditional hijab without the weight of extra fabric. The Internet loved them, buying out her entire available stock and inspiring her to start her clothing company, Pearl Daisy. Complete with accessories, hijabs, and hoojabs, the company opened its first storefront this year in Leicester, England.

Confidence hasn’t always come easy for Amena, making these accomplishments feel even more deserved and inspiring. Bullied in school, Amena spent years battling depression and social anxiety before diving head first into the study of Islam. A poetry-writing biology major, Amena pursued teaching following graduation in London, where she developed a deep relationship with her religion and husband-to-be.

Her content is vital to the YouTube ecosystem, as she represents and addresses the needs of young women of color. Like Tazzy Phe, Amena is also tearing down stereotypes surrounding Muslim culture with a personal look into her life and thriving business.

To Amena, thank you for changing YouTube for the better.