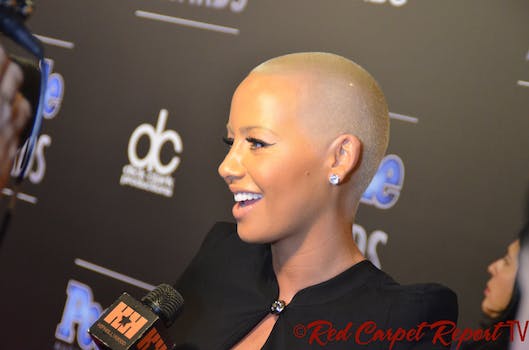 2015's going to be a tough Internet-breaking competition.

This story contains sexually explicit material and may be considered NSFW.

It took Kim Kardashian all the way until December to attempt breaking the Internet with her Paper magazine photos, but model and actress Amber Rose might have gotten close just three weeks into 2015.

She posted a series of photos to Instagram, each featuring her wearing a tiny string bikini. It covers up enough to float past Instagram’s rules and guidelines about nudity, but many of us are wondering where it ends and begins (If it’s all connected, is it still a bikini or technically a one-piece? Discuss.), and how she can move without the entire thing falling off.

Seeing how she’s lounging around and posing from what looks like a private residence, it’s probably not a major concern for her.

Turns out, the Internet thinks she’s slaying it too.

The debate over whether the bathing suit is a string bikini is still out. Instead of searching high and low for one to copy her look, people made jokes about how to make their own.

As with Kardashian last month and everyone from Beyoncé to Dita Von Teese, Rose is being criticized and slut-shamed for posting the photos because she is owning her sexuality in a public setting while being a mother, something Beejoli Shah called “a bunch of anti-feminist bullshit” last month.

“And the fact that it’s being thrown at [Kardashian] primarily from other women?” Shah wrote. “Well, that’s just worse.”

Rose’s fans are standing up for her right to post photos of herself in various states of undress online while using the platform to call out others who praised Rose but shamed Kardashian last month.

So Amber Rose can get away with taking provocative images but when Kim Kardashian does it everyone questions her competency as a mother. ok

I don’t know about you, but I inexplicably have a sudden desire to go to the gym now.

RT if Amber Rose got you renewing your gym membership.