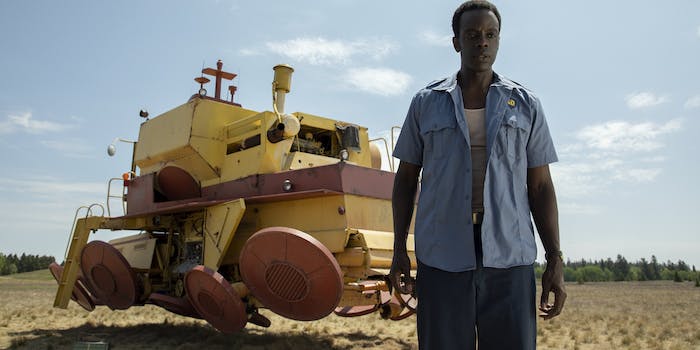 Amazon’s ‘Tales from the Loop’ is heartfelt, atmospheric science fiction

This beautiful new anthology series is a unique twist on Spielbergian sci-fi.

Inspired by Simon Stålenhag’s whimsical paintings of rural landscapes populated by retrofuturistic machines, Tales from the Loop is an atmospheric blend of sci-fi and subdued human drama. Falling somewhere between serialized TV and anthology shows like Amazing Stories, it takes place in a small town above “The Loop,” an underground particle collider that causes bizarre phenomena to emerge nearby.

Tales from the Loop follows a long tradition of small-town sci-fi/fantasy shows, but it’s tonally the opposite of a fast-moving, genre-savvy thriller like Stranger Things. Each episode is a standalone vignette featuring recurring characters from around town, some following a sci-fi theme (time travel; parallel universes) while others are family dramas that just happen to take place in a fantastical setting. The focus is on emotional storytelling over action, relying on thoughtful production design instead of complicated textual worldbuilding. Like the grungy world of Star Wars, the Loop’s environment works because it feels natural to its inhabitants. Characters casually stroll past past giant robots and hover-tractors, in a town that otherwise looks like a Soviet-influenced version of mid-to-late 20th century America.

The show has a unique origin story, beginning with illustrator Simon Stålenhag creating his first Tales from the Loop art as a side-project in the early 2010s. Inspired by movie concept artists like Ralph McQuarrie, and his own upbringing in rural Sweden, Stålenhag envisioned a Spielbergian landscape where retrofuturistic technology exists alongside peaceful suburban life. Eventually he developed a backstory for his work, based around the idea of an underground particle collider on the outskirts of Stockholm. This led to narrative art books, a tabletop game and now this English-language show, which transfers the Loop to an unspecified location in the U.S. Showrunner Nathanial Halpern (Legion) wrote every episode, working with big-screen directors including Andrew Stanton (WALL-E) and Mark Romanek (Never Let Me Go).

The two most recognizable cast members are a pair of Loop researchers played by Rebecca Hall and Jonathan Pryce (giving a wonderfully sensitive performance as usual), but there’s no specific protagonist. Amazon sent out three episodes for review (one, four and six), and I initially assumed it was a family-oriented show because the first two are told from a child’s perspective. What a breath of fresh air! A kid-friendly sci-fi drama that doesn’t talk down to its audience, creating a sense of wonder and emotional depth without explaining every little detail! But the third episode (a dysfunctional romance starring a brilliantly awkward Ato Essandoh) is rather more adult, so it looks like Tales from the Loop will vary from week to week. Fortunately thanks to the quasi-anthology format, you can dip in and out as you see fit.

While “weird things happen in small-town America” is hardly an original conceit, Tales from the Loop feels satisfyingly fresh. Stålenhag’s illustrations gave the show a specific aesthetic to work from: a muted, retro color palette, with a sense of fashion and architecture that embraces the pre-digital era without succumbing to obnoxious nostalgia. The purpose of the Loop, and the origin of the strange machines nearby, is never fully explained. It doesn’t need to be. The sci-fi elements are a backdrop for sincere, well-observed stories of the “show, don’t tell” variety, accompanied by a beautiful score by Paul Leonard-Morgan (Limitless) and the legendary minimalist composer Philip Glass —a perfect choice for a series involving time travel and the quiet rhythms of everyday life. By the time I reached my third episode, I was already having a pavlovian response to the credits music: total certainty that I was about to watch something great.

Tales from the Loop begins on Amazon Prime on April 3.