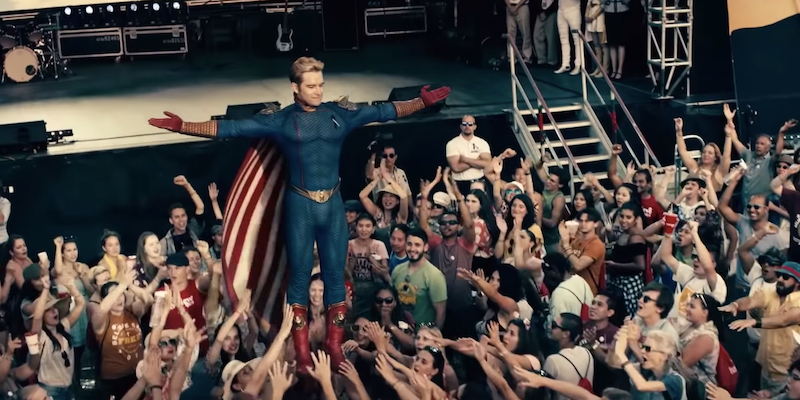 ‘The Boys’ is the superhero satire MCU skeptics deserve

The world may need heroes, but it also needs satire.

This year’s San Diego Comic-Con was yet another triumphant moment for Marvel to plant its flag as the dominant force in the modern film industry. Disney dominates the box office, and superhero fandom dominates popular culture. Even the smallest bit of news about a superhero film can ignite social media.

If superheroes are going to dominate the monoculture, then we at least deserve satire that’s as creative and interesting as The Boys. The new Amazon Prime series is the result of a partnership between comedy veterans Seth Rogen and Evan Goldberg and Supernatural creator Eric Kripke. The combination of Rogen and Goldberg’s comedic chops and Kripke’s genre expertise has yielded one of the most biting superhero parodies to date.

The Boys is an adaptation of a comic series by Garth Ennis and Darick Robertson that ran from 2006 to 2008, and like the comic books, the series follows a group of human vigilantes trying to take down corrupt superheroes. Despite the age of the source material, the series has an incredible awareness of our current cultural moment and feels very much about 2019.

In a sense, The Boys is a supervillain origin story. Mild-mannered AV technician Hughie (Jack Quaid)’s girlfriend dies by the hands of a superhero five minutes into the pilot. The death is needless and gratuitously graphic, like so many deaths in actual superhero fare. But unlike many innocent bystander deaths in the superhero world, this one actually serves the plot. Hughie resolves that he will become a vigilante who keeps superheroes in check.

Hughie quickly learns the dark truth about the fresh-faced superheroes who protect his world. Vought Industries (a combination of Marvel and a defense contractor like Raytheon) controls superheroes and leases them to cities across the country at high prices. The heroes themselves, led by “The Seven,” an approximation of the Justice League or the Avengers, are venal, carnal, and callous.

Hughie meets a mysterious Aussie named Billy Butcher (Karl Urban) who also holds a grudge against superheroes, thus beginning his literal antihero journey. He meets the rest of “The Boys,” fellow anti-superhero conspirators who have have their own grudges against “supes.”

The Boys sets a high bar for itself, trying to parody both the military-industrial complex and Hollywood monoculture at once. You get lines like, “It is without a doubt a good time to be in the superhero business… The branding opportunities are limitless.” But you also get lines like, “Allowing superheroes into national defense—basically we would be privatizing war.” This broad satirical canvas allows the show to take shots at Hollywood sexism, police brutality, NDAs, Academi, neoliberal philanthropy, corporate greed, and a myriad other plagues of our modern moment.

While it excels as an ambitious satire, The Boys is also a fine superhero show in its own right. Kripke has mastered the art of writing and staging great fight sequences after a decade-plus of Supernatural, and Rogen and Goldberg have perfected mixing action and humor on efforts like Preacher and The Interview. One particularly stunning fight in the pilot involves The Boys duking it out with an invisible superhero. The production design and cinematography are top-notch, which is vital if you’re trying to send up blockbuster superhero fare.

Despite all The Boys does well, it has its limitations. The romantic angle, so vital in sustaining any hourlong drama, isn’t quite there. Erin Moriarty plays Starlight, a rookie superhero who serves as Hughie’s love interest. She gives the strongest performance on the show, but she’s sometimes saddled with thankless material.

The boy’s club writing tendencies and gory style will turn some people off from The Boys. The line between parodying and embracing the problematic aspects of the superhero genre feels awfully thin at times, and the show often feels caked in blood, sweat, and semen.

Despite its blind spots, The Boys fundamentally works works well because it understands the symbiotic relationship between our politics and our culture. One character says in the pilot: “Movie tickets. Merchandising. Theme parks. Video games. A multibillion-dollar global industry supported by politicians on both sides. But the main reason you won’t hear about it is because the public don’t want to know about it.”

This dialogue could apply to Marvel movies or politics. People put equal faith in Captain America and Beto O’Rourke to save us, even though there’s no saving a rotten system. For Kripke, Rogan, and Goldberg, the rot at the core of American life is pervasive, corrupting everything from the silver screen to the halls of Congress. Dousing it all in buckets of blood feels excessive at times, but it’s not hard to see why they want to do it.

If the prospect of Marvel movies dominating the box office from now until your unborn child graduates college, you’ll likely enjoy a parody as smart, funny, and acidic as The Boys. Early episodes may not do everything right, but more often than not, the show sucker-punches the superhero genre with a wink and a smile.