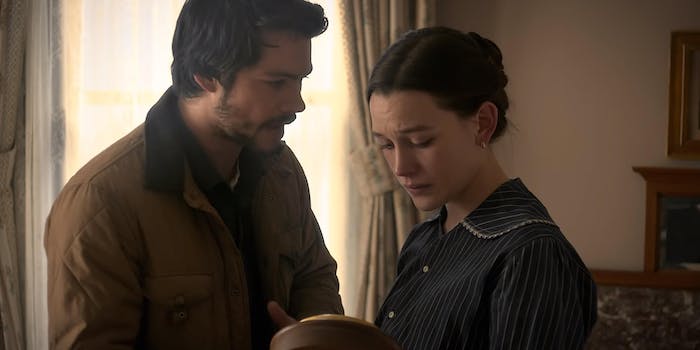 Apple TV’s Amazing Stories hops onto the trend for anthology shows, reviving the 1980s sci-fi/fantasy series created by Steven Spielberg. The revival opens with a time-travel romance by writer Jessica Sharzer (A Simple Favor) and director Chris Long (The Americans), a fairytale conceit fueled by big, simple emotions and charming performances from the two leads.

Unlike Apple’s more dubious attempts at adult prestige TV, Amazing Stories aims at something similar to Doctor Who: family-friendly adventures that kids and adults can both enjoy. Episode 1, “The Cellar,” stars Dylan O’Brien (Teen Wolf) as Sam, a slightly feckless millennial who works for his brother’s construction company. They’re renovating one of those large, semi-rural American houses you’ll recognize from a dozen Amityville Horror ripoffs, but the vibe is more whimsical than spooky. When a storm hits, Sam goes down to the cellar to fix the breakers… and when he rushes back upstairs, the house has changed. No longer an empty fixer-upper, it now has a well-stocked kitchen and vintage decor. A young woman is playing piano in the living room, and she’s shocked to see a strange man appear in her house—but not too shocked to chase him out with a shotgun.

We’ve all seen this kind of story before: a fish-out-of-water adventure about a time traveler in an unfamiliar historical period. Unusually for the genre, this particular fish isn’t as panicked as you might expect. Sam is a chill guy, and while he’s freaked out by the discovery that he’s traveled to 1920, the main conflict is romantic. He quickly realizes that his route home has something to do with that house’s cellar, and that means befriending the young woman who lives there: Evelyn (Victoria Pedretti), who is destined for an arranged marriage. Romance blossoms between these star-crossed strangers, but how can they stay together when they were born 100 years apart?

This idea works best if you don’t think about it too hard, and I don’t mean that in a bad way. When Sam starts daydreaming about bringing Evelyn back to 2020, you should just shut down the part of your brain that asks, “But how will she get a social security number?” Likewise, you may choose to gently ignore the subtext that Sam—a young white guy with professional handyman skills—finds it pretty easy to get by in 1920, perhaps more so than in the present day, where he goes on desultory Tinder dates while failing to choose a career.

Fortunately, the show doesn’t push an overly nostalgic view of the period. Evelyn isn’t exactly happy, unable to choose her own husband or even listen to decent music. I appreciated the styling choices here, because audiences have certain expectations for prohibition-era aesthetics, and they’re tied up in the kind of flapper fashions you’d see in Manhattan. Raised in a conservative rural community where jazz is labeled “perverse,” Evelyn looks closer to the 19th century.

You may recognize Victoria Pedretti from her much darker role in Netflix’s deliciously terrifying The Haunting of Hill House (as well as her main role on season 2 of You), the only overlap here being her sense of youthful innocence. She and O’Brien are both very charming, giving us a compelling love story between two characters who were probably somewhat two-dimensional on the page.

The Amazing Stories trailer hints at a wide range of Spielbergian sci-fi stories, but “The Cellar” (the first episode of six) was the only one Apple sent out for review. It’s a promising start: a sincere standalone drama with charismatic leads. Not as bold as Jordan Peele’s Twilight Zone revival, but a perfectly enjoyable contemporary twist on a retro style of short story—and unlike most sci-fi anthology shows, it’s equally suitable for kids and adults.

Apple TV+ launched on Nov. 1, 2019 with a robust library of movies and series. Here’s everything we know about the service.