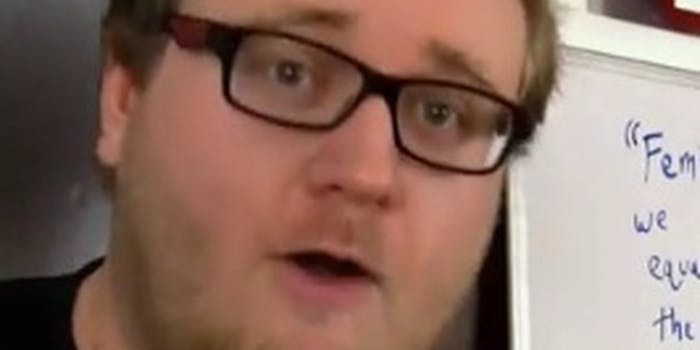 The Amazing Atheist vs. Something Awful’s Jon Hendren

Jon Hendren’s retweets of disappointed gift recipients has been the subject of Reddit threads, tribute videos, and now a YouTube feud.

YouTuber TJ Kincaid, better known as the Amazing Atheist, is the subject of online controversy once again—but not over his personal views or about an intimate act with a banana.

The Amazing Atheist is getting flak from the Internet for using an idea, without proper credit, in his latest video that originated on Something Awful writer Jon Hendren’s Twitter account. To make things more complicated, the intellectual property in question didn’t technically belong to Hendren in the first place.

On Christmas, Hendren took to retweeting the thoughts of disappointed (and sometimes angry) gift recipients who did not get the iPhone or car they wanted (definitely a first world problem). Hendren’s retweets became popular on Twitter and social news site Reddit, which devoted multiple threads to Hendren’s retweets and turned them into a joke.

Hendren’s retweets went on to be featured on the pop culture websites the Daily What and Buzzfeed, and he was also interviewed by TechCrunch, where he was deemed a “phenomenon.” Jonathan Mann, a musician on YouTube, even turn the retweets into a song (and credited Hendren with the idea).

As the retweets became more popular, folks on Twitter took to attacking those that had originally tweeted about not getting a car or an Apple product. Many of the original tweeters ended up deleting their offending tweets, while others maintained it was done for irony.

Here enters the Amazing Atheist (TAA) and his video “WORST PEOPLE EVER?”

In TAA’s 14-minute rant, he reads aloud  the retweets, which were clearly labeled “retweeted by Jon Hendren,” and further extrapolates on the spoiled nature of the retweets. However, TAA, whose videos have collectively been viewed more than 88 million times, never specifically says Hendren’s name in the video—an omission that angered the Internet masses.

Hendren tweeted that TAA was “terrible, I would expect nothing less” and “he’s completely awful in every way.” Hendren supporters took to leaving comments on TAA’s video, insulting him for his weight or calling him an “asshole.” Comments “in defense” of Hendren were the top comments on TAA’s video for hours last night.

“Did you seriously jack this material from @fart, you fat fucking zero? There can be no doubt in anyone’s mind at this point–you are completely and utterly devoid of new ideas. It’s time to get a job,” wrote Forehead2Brick on YouTube, a sample of some of the hateful comments.

In coming to TAA’s defense, some users questioned Hendren’s ownership of the retweets.  ehdie1 argued that making a video about the tweets was equivalent to retweeting them.

Kincaid, on the other hand, is a YouTube Partner, who’s compensated according to page views. The least he can do is properly attribute his source material.

In response to this story, Hendren tweeted at the Daily Dot and the Amazing Atheist, writing “i don’t really care about credit and don’t think i deserve anything. i just think he’s fat&dumb.”