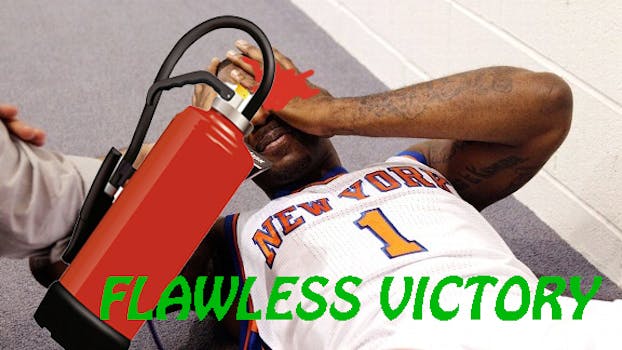 If you can't take the (Miami) Heat, it's best not to punch a fire extinguisher—judging from this hilarious new Twitter account.

After Monday night’s loss to the Miami Heat, struggling New York Knicks star Amar’e Stoudemire punched a glass casing surrounding a fire extinguisher out of anger, injuring his left hand and ego. He received stiches and will likely miss game three of the playoff series on Thursday.

“I am so mad at myself right now, I want to apologize to the fans and my team, not proud of my actions, headed home for a new start,” Stoudemire tweeted in the first of two messages addressing the incident.

“We all have done thing out of anger that we regret. That makes us human. Bad timing on my part. Sorry guys. This to shall pass.”

Now the fire extinguisher is fighting back in a new Twitter parody account (@AAAExtinguisher) that mocks Stoudemire.

“Amare should look into getting a 2nd teardrop tattoo on his cheek after tonight,” tweeted the account to its 1,100 followers, adding later, “I busted my glass to get where I’m at.”

“I promise that the only thing I’ll ever break in Miami again is my hip someday,” tweeted the account early Tuesday.

For Stoudemire’s sake, let’s hope the Knicks find a better way to extinguish the Heat.