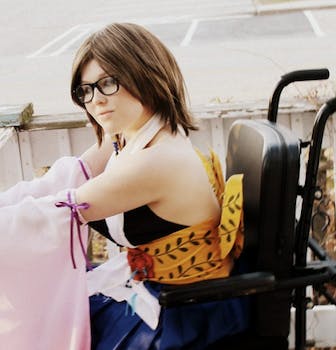 Misa on Wheels rolls into cosplay

Costume play is for everyone–regardless of physical ability or disability.

Amanda Knightly knows that getting looks from strangers is inevitable. She’s used a wheelchair since she was ten, and she’s grown accustomed to being different.

However, the 22-year-old would rather receive strangers’ gazes on her own terms. That’s why Knightly has embraced cosplay, sewing costumes and dressing up like her favorite anime and video game characters in public under the pseudonym Misa on Wheels.

“When you are physically different in any way, like in my case using a wheelchair, society is bound to stare,” she told the Daily Dot. “And with my cosplay, I can give them something pretty cool to stare at.”

Online, Knightly goes by Misa on Wheels, a name she gets from one of her favorite anime characters, Misa Amane from Death Note. Through her Facebook, Tumblr (warning: automated music), and DeviantArt site, Knightly has become a motivational figure for disabled cosplayers. She frequently pens inspirational quotes to generate discussion about disabilities, like this one:

“Disabilities do not make people less beautiful. They are just one other characteristic that makes them unique. In a way, disabilities are like new abilities, such as being able to see the world from a different perspective and learning how to do everyday things in a new way.”

“You are an amazing person,” commented Taga Pixie. “I deal everyday avoiding mirrors and hating the way I look due to my disability. You are an inspiration and I really hope I can get to be more like you.”

Knightly’s social media pages have become active communities in their own right, with thousands of followers and sometimes as many as two hundred people commenting each time she posts an update. The New Hampshire native attributes this to the fact that she doesn’t try to hide her condition.

“Perhaps it is because I am doing something that so few people in my situation do. I am putting myself out their and not letting anything stop me,” she said.

A recent college graduate with her B.S. in psychology, Knightly thinks the key to understanding people who are different starts with open discussion. As a result, she is well versed in sharing the particulars of her condition, Charcot-Marie-Tooth disease, a form of muscular dystrophy which has caused her nerves to atrophy from her elbows elbows and knees down, leaving her partially paralyzed.

“I started using a wheelchair when I started to go through growth spurts and my legs could not support the rest of my body,” she explained to us.

She has also had to make other adjustments, aside from the wheelchair, to accommodate her disability.

For example, Knightly manages all her online interaction by typing only with the side of each pinky finger.

CMT can make tasks that require fine motor skills—like sewing costumes and make-up— tricky, but Knightly is up to the challenge.

She’s been cosplaying for four years—ever since she heard about the hobby in her anime club at Colby-Sawyer College. She assembles most of her outfits with a combination of purchased items and basic sewing, but excels at costume make-up. She emphasizes different features to look more like Misa and Yuna from Final Fantasy—or Holo from Spice and Wolf.

“I do all of my own make-up for photoshoots, and I am a huge fan of enhancing ones own features or making them more like the characters,” she said. “Just like clothing, it is a form of expression and can be a lot of fun.”

Knightly’s photoshoots are usually shot by her fiancé, Tony. She said her family and friends have been supportive of her hobby, whether they understand it or not.

“They think that it is really awesome, even though not many members of my family are into anime or gaming. They still enjoy seeing my costumes and can appreciate all the work I put into it.”

Knightly said she hopes that by remaining a public figure, she can encourage other disabled fans to cosplay without worrying about what people will think. While she’s met a few other cosplayers with disabilities, most of her interaction with other disabled fans is anonymous.

“I get a lot of anonymous mail on Tumblr from people, and those looking to cosplay, with disabilities,” she said. “Maybe the anonymity shows that disability is still an issue that is not as openly discussed as it should be in today’s world. And I am doing my best to change that.”