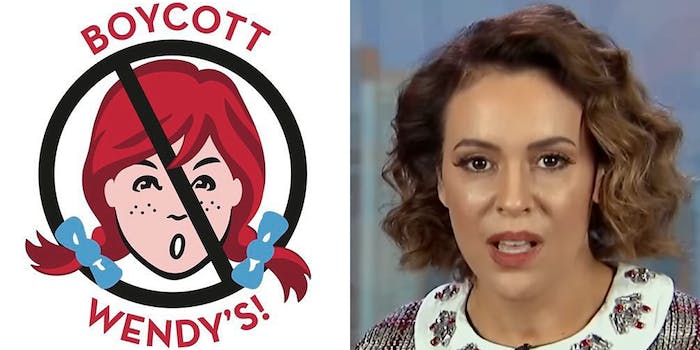 A Wendy's spokesperson alleged the protest is trying to exploit the Me Too movement.

Alyssa Milano is coming after Wendy’s.

On Wednesday, the actress posted to her Facebook page, detailing why she supports the farmworker women who recently protested the fast-food chain’s inaction on sexual harassment and violence, and demanded fair working conditions. The farmworker-led Coalition of Immokalee Workers, which has been working toward reforming the tomato industry in Florida and elsewhere in the South, lobbied to get Wendy’s to join them and keep women safe in the fields.

A Wendy’s spokesperson told Huffington Post that the CIW is “trying to exploit the positive momentum that has been generated by and for women in the #MeToo and Time’s Up movement to advance their interests.” Milano replied: “Wendy’s, this is very simple: These women are the #MeToo movement, which is a grassroots movement of women from all corners of society exposing the painfully common experience of sexual harassment, misconduct, and assault.”

Last week, farmworker women — joined by their families, fellow farmworker men, and scores of supporters from across the…

Milano doubled down on the Wendy’s boycott on Twitter and got a nod from Amy Schumer. She ended the post with this: “If you really want to get on the wrong side of the Time’s Up movement, keep using our name to attack and belittle farmworker women who are fighting to keep themselves and their sisters safe from rape in the fields.”