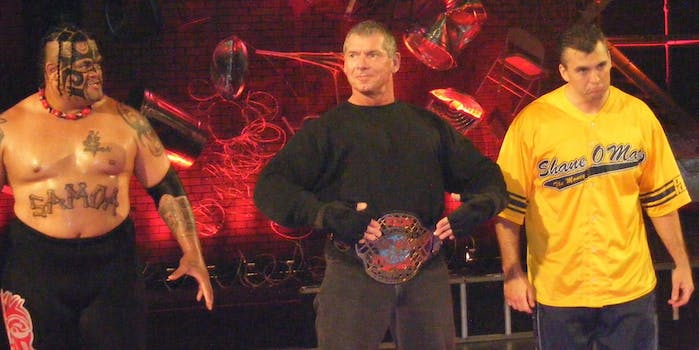 We pulled the highlights from them.

A user of the Reddit sub Squared Circle has released what are (allegedly) notes from Vince McMahon, which were passed down through various channels to his WWE broadcasters in 2010.

Generally, they’re what you’d expect from a boss handing notes down to an employee—like the package you’d read when you begin training at a Starbucks—but there are some fun, WWE-specific portions that are funny and unintentionally poetic. While the overall idea of the eight pages is to inform the announcers that they should use colorful language, not step on the in-ring action with their words, and generally know what the names of the people in the ring are, we’ve picked out a few standout moments from them. For instance, from a section entitled “Do’s”:

Take the high road- don’t be crude, especially with the Divas.

Take that, progressives! As you can see, the WWE, a corporation highly criticized for its sexism, is clearly making an effort to be classy, and especially when it comes to the hot pieces of scantly clad meat that they’re parading around on the television. So lighten up. Another note that exemplifies some progressive action:

Please be aware of major international events like the Earthquake in China, the Tsunami, the Mumbai Terrorist incident and be sensitive to people in those areas. You don’t necessarily have to call them out but don’t inadvertently insult them and others sympathetic by using a move’s name or an analogy that could be hurtful.

Also, we never want to use the term “choked out” or the word “choke” at all. We have renamed Undertaker’s submission the “Triangle Submission Hold.”

Now that’s a submission name that really rolls off the tongue, and fits great on T-shirts. Also under the “Do’s” is what should probably be a don’t, but let’s not get semantic here:

Do not use the word hatred.

Of course not. This is the WWE, not some gruesome, violent soap opera. The “Don’t’s” even include a note that says “Don’t call blood.” But, wait—that note is immediately followed by this:

Don’t say “Edge is busted open,” instead say “Edge got his teeth knocked down his throat!” or “Edge’s nose must be broken!”

After the proceeding notes, those are somewhat conflicting suggestions. Things get weirder in the notes, including a section entitled “Pronouns” which begins with:

Do not use pronouns.

This advice is obviously taken by those sending these notes down, as seen with this excerpt:

Know something unique about each Superstar and do not use all one knows about a Superstar in one match featuring that Superstar.

It’s a good thing they didn’t use pronouns—that sentence might be difficult to understand if those things were in there. In that same note, the WWE announcing style is slyly compared to getting somebody addicted to crack cocaine:

The goal is to make each Superstar elicit an emotional reaction and investment from the viewer so the viewer is compelled to tune in next week to sample more of the product.

And, going from weird to poetic—and slightly creepy, like waking up next to a horse’s head that the Godfather has left next to you in your sleep—the next note is our favorite bit from these instructions:

Personal issues are ever lasting. Most people will remember the emotional stories our Superstars are involved in. For example, no one will forget the Austin-McMahon rivalry but few will remember who the champion was during those epic struggles at every turn in the road. Titles are important, but only as important as we make them, but personal issues last forever.

Well, that got heavy. But it shouldn’t be! This is just entertainment—hell, it’s not even as heavy as something like, I dunno, sports might be:

Please do not use the term Sports Entertainment. Going forward, please use “Entertainment” in place.

Yup, it’s just entertainment, folks, although it’s probably just called that for some sort of legal reason, in case the government someday decides to hold sports organizations responsible when they’re athletes die of painkiller addictions, or just die right there on live television.

We’ll leave with this excerpt, which is instructing the proper dynamic that should exist between the color commentator, and the one who’s doing the play-by-play stuff:

Play by play announcers cannot be emasculated by their broadcast partners.

Indeed. Nobody wants their broadcasting partner to make them look like some kind of woman, unless, of course, the broadcaster is a woman.

Hah! That’s a joke—everybody knows that women in the WWE are Divas, not broadcasters.