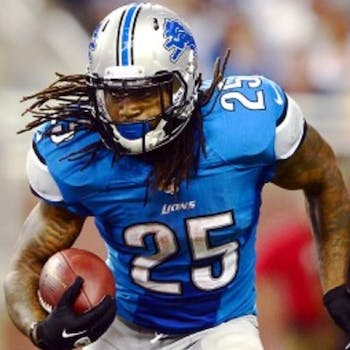 Here's how to get a deal done like a pro.

The dense spreadsheets that accompanied value-based drafting breakdowns about baseline players pointed to a need for elite quarterbacks and tight ends in August. Then rookie signal callers came out of the box prepared to sling for 300 yards, and Todd Haley relieved Heath Miller of blocking duties.

The original fantasy tenet stands: A running back is the most scarce, volatile resource we have as owners. The most successful team in your league likely drafted Matt Forte and Jamaal Charles one and two, lucked out on C.J. Spiller or Doug Martin or Alfred Morris after building a fort of lottery tickets. This week the waiver wire should have been a quest to land Felix Jones or Alex Green or William Powell or Daryl Richardson or Shonn Greene in the event someone lost patience and cut one of them earlier.

More pertinently, you need to pull the trigger on a trade. You have to package star power wide receivers—no matter how big their numbers—for primary backs. These deals may cede points, but you’re paying for scarcity. Receiving production can always come from Brandon Gibson. This week, I traded Hakeem Nicks (one of the explosive figures on one of the league’s most complete passing offenses) for high upside Detroit Lions running back Mikel LeShoure. This is where the market stands.

A few tips for pulling this off: Begin with exploratory texts to a handful of owners currently sitting in front of you in the standings. Blind email proposals rarely work; a trade needs to be ironed out over a day or two. If you have an elite defense like Chicago’s, sweeten the pot by including a provision that swaps team defenses. Fantasy D is a crap shoot week-to-week, but the psychological edge of owning Brian Urlacher’s linebacking iconography is vastly underrated. Don’t hesitate to sell high on players that have owned the opening weeks.

Do pick up the phone and iron out the fine details like an adult.

When it’s worked out, close the deal by giving your opponent added confidence and ownership of the move: Thanks again, go ahead and propose the deal and I’ll accept it when I get to a computer.

Palmer stunk up the joint at Denver a few weeks ago, but he’s otherwise averaging over 300 passing yards per game and his opposition, the Jacksonville Jaguars, are 30th against the pass.

Vick Ballard has inherited 20-plus carries. Phillip Tanner lingers in Dallas’ backfield and could be a huge factor if Felix Jones, who has durability issues and an inability to shine when it matters, struggles early.

Santana Moss caught six balls against Minnesota last week and historically shines against the NFC East. Moore’s value is inflated because of the Jaguars matchup. Keller is finally healthy, the Patriots secondary is porous, and you should budget him for 40 yards and a touchdown in relief of stalwarts on bye weeks like Antonio Gates and Tony Gonzalez.

Bell is squarely the number two back in Detroit and is a great replacement in PPR leagues because of his contributions to Detroit’s check down passing.