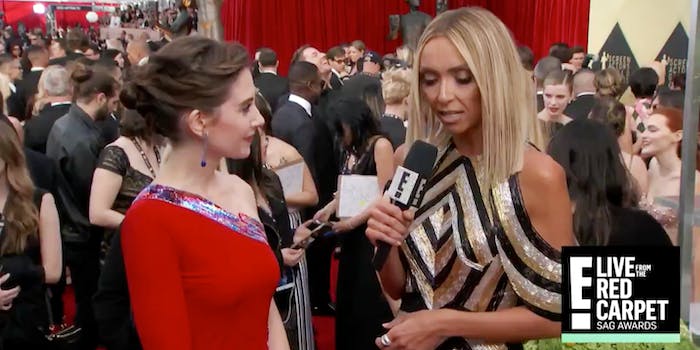 'I obviously support my family.'

And while Brie did not take home any awards at the end of the night, she was afforded the opportunity to be questioned on the red carpet about accusations against her brother-in-law James Franco, who skipped the red carpet but did attend the SAG Awards. Brie is married to James’ brother, Dave Franco.

E!’s Giuliana Rancic, who has a history of controversial red carpet interviews, took the opportunity Sunday evening to ask Brie how the reports against Franco—who has been accused by five women of sexual misconduct—have affected the rest of the Franco family.

“What we’ve always said is that it remains vital that anyone who feels victimized should and does have the right to speak out and come forward,” Brie said. “I obviously support my family and not everything that’s been reported is fully accurate, so I think we’re waiting to get all the information. But, of course, now is a time for listening and that’s what we’re all trying to do.”

At the 2018 #SAGAwards, Alison Brie addressed the allegations of sexual misconduct made against her brother-in-law, James Franco: "It remains vital that anyone that feels victimized should and does have the right to speak out and come forward." pic.twitter.com/dG5uJJVko7

Viewers took to Twitter to express their distaste that Rancic used her few moments with Brie to ask about Franco, rather than asking about Brie’s own accomplishments and career.

Alison Brie was so well prepared for E!’s James Franco question. It’s almost like they had a family meeting about how horrible this red carpet was gonna be for them and she volunteered as tribute.

Cannot believe I just watched Giuliana ask Alison Brie about accusations related to her brother-in-law, James Franco, on a night where she's celebrating her work. Bravo to Alison for handling it with grace and maintaining that now is the time to listen to women. #ERedCarpet

Why the fuck would Alison Brie be answering for James Franco’s behavior. WHY DO WOMEN HAVE TO ANSWER FOR THE CRIMES OF MEN HELLO https://t.co/wbw6IDceTQ

so cool that even though James Franco and his brother Dave were at the #SAGAwards the person who had to comment on James' sexual exploitation allegations was Allison Brie https://t.co/RiJPIQ0RSn

Rancic didn’t just upset fans during her interview with Brie, either. She was also called out for how she treated Kelly Marie Tran, from Star Wars: The Last Jedi, whom she only asked if there were any celebrities that Tran was excited to take a selfie with—instead of asking about her accomplishment as the first Asian-American woman to star in a Star Wars film.