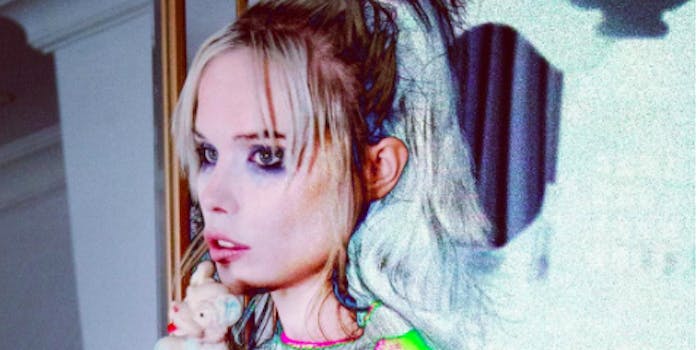 'He forced me to have sex with him or, he said, I wouldn't be allowed to be in the band anymore.'

The statement accused Kath, whose real name is Claudio Palmieri, of rape, sexual assault, harassment, and physical and psychological abuse. Glass tweeted a link to her statement, using the hashtag #MeToo.

this is why I had to leave Crystal Castles. here is my story: https://t.co/bs9aJRwgms #metoo

“He forced me to have sex with him or, he said, I wouldn’t be allowed to be in the band anymore,” Glass wrote in the statement.

Glass said she met Kath when she was about 15 years old and Kath was 10 years older. She said that was when he first took advantage of her. “I came to in the back of his car extremely intoxicated (from drinks he had given me that night),” Glass said.

The singer said Kath was very manipulative and used her insecurities against her after he figured them out. She said he would often give her drugs and alcohol to have sex with her while he was sober. She also accused him of convincing her to drop out of high school only two credits away from graduation.

“[He began] controlling my behavior: my eating habits, who I could talk to, where I could go, what I could say in public, what I was allowed to wear,” Glass said. “He became physically abusive… He controlled everything I did.”

Glass describes incidents in which Kath allegedly threatened to throw her down staircases and threw her onto concrete, leaving bruises. After threatening to leave the band if the physical abuse did not stop, Glass said Kath swore he would stop.

In October 2014 Glass finally left the band, but did not specify why at the time. In her statement, Glass said she has opened up about her past of abuse but has always been too afraid to name names and that the fear has silenced her.

“Leaving Crystal Castles was the single most difficult decision I’ve ever made—that band was everything to me,” Glass wrote. “As difficult as it was, I knew that leaving was one of the best decisions I’ve ever made. It has taken me years to recover from enduring almost a decade of abuse, manipulation and psychological control. I am still recovering.”

Kath has yet to address Glass’ claims. The band hasn’t tweeted since August 2016, and Kath’s personal Twitter remains protected.