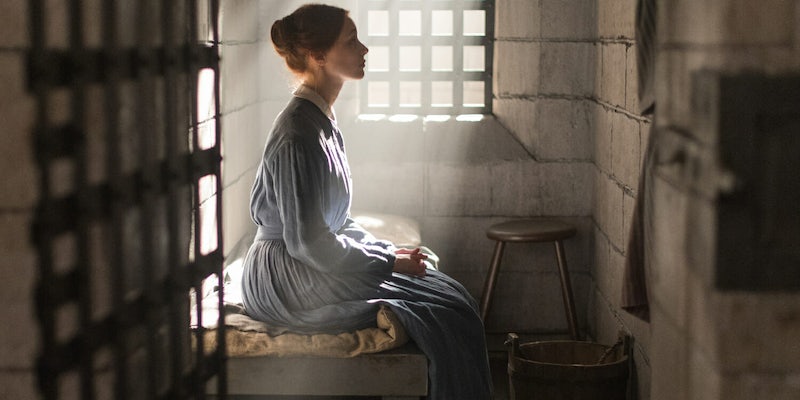 The spellbinding miniseries proves it's the year of the Margaret Atwood adaptation.

Earlier this year, Hulu earned eight Emmys with its adaptation of Canadian author Margaret Atwood’s dystopian classic The Handmaid’s Tale. Now Netflix is bringing another of Atwood’s beloved tales to the small screen with Alias Grace, a new six-hour miniseries directed by Mary Harron (American Psycho) and written by Sarah Polley (Away from Her). Sarah Gadon stars as Grace Marks, a seemingly demure domestic servant who became infamous in Canada after being convicted of a brutal 1843 double murder. The question of whether she did it, and why, and of what forces brought her to that point, shapes Netflix’s adaptation of Atwood’s twisting narrative… and leaves behind far more questions than answers.

As Grace recounts her story to her physician (Edward Holcroft), her hands are rarely still. She’s constantly sewing, blending different fabrics and patterns even as she binds together the disparate threads of her long path toward the double murder that earned her infamy. It’s a small act of control for a woman robbed of basic freedoms even before she ran afoul of the law, bent beneath the weight of a culture that oppressed her on every front: as an Irish immigrant in Canada; as a woman of low birth in a society still reeling from a recent rebellion against the aristocracy; even simply as a woman, period.

But Grace’s quilt work is also a keen metaphor for the central question of whether we can actually believe anything she says. Late in the series, Grace is explicitly compared to Scheherazade, whose storytelling feats in One Thousand and One Nights were designed to convince the Sultan to spare her life just one more day. Is Grace the (mostly) innocent victim of a violent man eager to share the blame for his grisly crime? Is she instead the mastermind behind it, a seemingly powerless servant whose skill at manipulation and deceit orchestrated those killings without the actual murderer even realizing it was happening? Could the truth be even more fantastic, and tied to the death of one of Grace’s beloved friends many years earlier? All these possibilities are on the table, and Alias Grace challenges viewers to stitch together their own answers.

It’s a delicate webwork of story that demands a particularly adept spider be situated at its center, and Gadon proves more than capable in the lead role as Grace. She plays every note of Grace’s life and journey with marvelous subtlety, ensuring that, whatever your theory about Grace’s true nature, you’ll find plenty of evidence to make your case. Her Grace is both victim and conductor, often in the same scene and separated only by the slightest change in the corners of her mouth or the intelligence behind her eyes. Moreover, even if the story of Alias Grace were divorced from the central murder mystery, Gadon’s performance would still be worthy of every minute of screentime, serving up a hypnotic look at a woman trying her level best to navigate a society that’s been stacked against her from the moment of her birth.

Polley’s script work also shines, deftly juggling a large cast, multiple time frames and settings, framing narration from a possibly unreliable protagonist, and a central mystery that needs to be both compelling and satisfying without providing concrete answers that the real-life case denied us. One of the highest compliments that I can pay Alias Grace is that it made me want to go read the book immediately, and that very rarely happens with screen adaptations.

With today’s news filled by stories of women speaking out against powerful men who abused that power as predators, and with other powerful men still seeking to limit, control, and roll back modern women’s abilities to shape and define their own lives, Atwood’s stories feel more timely—and more timeless—than ever.