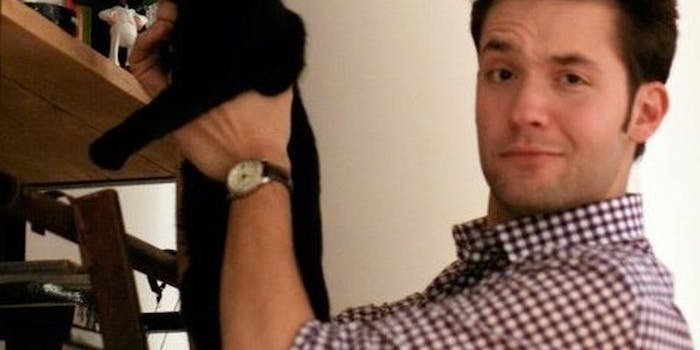 In Without Your Permission, Alexis Ohanian will chronicle how the Internet frees us to do great things.

All things being equal, awesome ought to win, right?

That’s how it works on social news site Reddit, where users vote the best links onto the homepage. And that’s how the world should work, too, according to the site’s cofounder, Alexis Ohanian.

Now Ohanian, 28, wants to show the world how to bubble awesome up to the top—with a book.

Without Your Permission: How the 21st Century Will Be Made—Not Managed is the book’s working title. It will look at “real-world examples of people not asking anyone’s permission to share and create their ideas,” Ohanian told the Daily Dot in a phone interview.

To put it another way, it will be a “a prescription and inspiration for doing awesome stuff on the Internet,” Ohanian said.

Ohanian (pictured here with his cat, Karma) points to the case of Deborah Guardino.

In May the 50-year-old school teacher watched with horror from her Virginia home as a tornado ripped apart the town of Joplin, Missouri.

But thanks to DonorsChoose.org, Guardino did more than wire some money to a charity. She essentially launched her own. Within days she had flown out to Joplin, where she taught teachers how to use DonorsChoose.org to solicit donations for projects online. By the time she was done, she’d helped launch more than 200 projects and raise more than $400,000 for Joplin schools.

Ohanian said he was first approached about writing a book after he left Reddit in 2009 (he’s since returned as an advisor).

Editors, Ohanian said, really liked a TED talk he had given about memes, the Internet, and the marketplace of ideas—a marketplace where sometimes a humpback whale named Mister Splashy Pants is the winner.

But in the meantime Ohanian was too busy working on his charitable company Breadpig (a kind of Newman’s Own for geeky comic books and other wares) and helping launch a new company, travel search site Hipmunk, which Reddit cofounder Steve Huffman invited him to join in 2009.

Still, the book idea never went away. His friends in the publishing industry kept up the encouragement.

Then, earlier this year, Ohanian took a trip to Egypt at the behest of the U.S. government, where he spoke to a group of Egyptian tech entrepreneurs.

“It was a real mindfuck talking to entrepreneurs in Cairo,” Ohanian said. “They were actual revolutionaries. As they’re trying to rebuild their country, thinking about their startups, they were asking the exact same things about their startups as people do in Silicon Valley.”

With things going well at Hipmunk, Ohanian realized “now is the time” to write that book.

What’s the connection between revolutionaries turned entrepreneurs in Cairo and a 50-year-old school teacher in Virginia? Leveraging the Internet to make their big ideas a reality.

And if Ohanian has his way, there will be a lot more people like them.

Without Your Permission is scheduled for release in 2013.