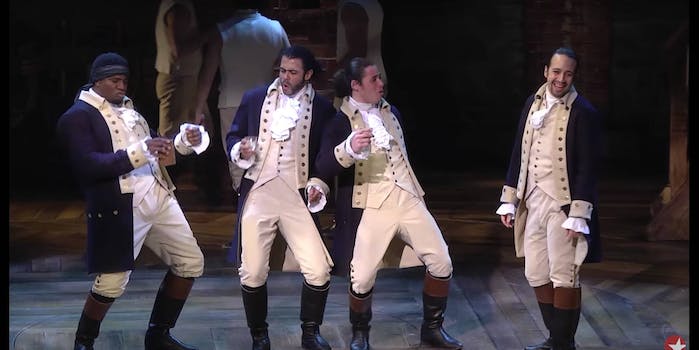 Spotify says ‘Hamilton’ soundtrack is on track to smash records

Alexander Hamilton—America streams for you.

Not even the future vice leader of the free world can keep the Hamilton musical down.

According to Spotify, the Hamilton soundtrack is on course to be streamed more than half a billion times in 2016.

Through the year the soundtrack experienced two significant spikes in streaming that contributed to reaching the half-billion mark. The day after the cast’s performance during the Grammy Awards in February, overall streams increased 69 percent. Then the day after the musical won 11 of 16 Tony Award nominations in June, overall streams jumped 80 percent.

Unsurprisingly New York and the borough of Brooklyn take the first and second spots for the top 10 cities streaming the Hamilton soundtrack. Chicago takes third place with Houston in sixth, and the Bronx borough takes eight.

With less than a month left to break the half-billion mark, we might as well keep the party going with a few spins more.