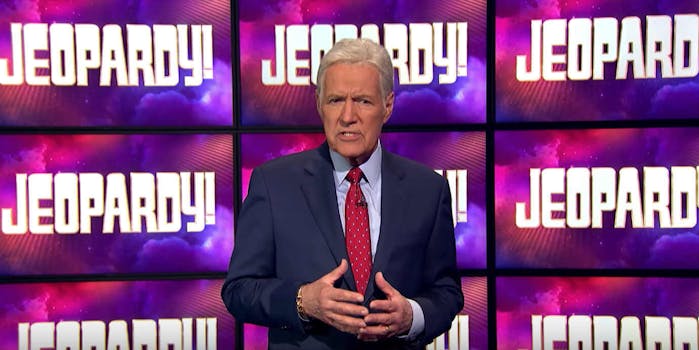 Alex Trebek says he will be undergoing chemotherapy again

The host called the announcement that he was almost in remission 'over-optimistic.'

Jeopardy host Alex Trebek just updated his fans with some troubling news: He needs to restart chemotherapy, just weeks after announcing he was almost in remission.

“The course of pancreatic cancer treatment is not a straight forward affair. There are always curves and unexpected events,” Trebek said in a video posted to YouTube. “This past summer, because I was making such good progress, we thought I was finished with chemo.”

The game show host explained that the belief he was all done with treatment was “a bit premature” and “certainly over-optimistic.”

“I began immunotherapy but that didn’t go very well at all. My numbers went south, drastically and quickly,” he said.

The 78-year-old announced, in a similar fashion, in March that he was diagnosed with stage 4 pancreatic cancer.

“Now, normally, the prognosis for this is not very encouraging, but I’m going to fight this,” Trebek said at the time. “And I’m going to keep working and with the love and support of my family and friends—and with the help of your prayers also—I plan to beat the low survival rate statistics for this disease.”

A Message from Alex Trebek: pic.twitter.com/LbxcIyeTCF

Only a couple weeks ago, in August, Trebek–who has hosted Jeopardy for 35 years–told People his fight with cancer was nearly over.

“I’ve gone through a lot of chemotherapy, and thankfully that is now over,” he said. “I’m on the mend and that’s all I can hope for right now.”

Sadly, this announcement means his road to recovery has just taken another turn, but Trebek remains optimistic. He urged fans to remain optimistic as well because doctors expect “good results” from the treatment. Still, Trebek asked for viewers to keep him in their “thoughts and prayers”.