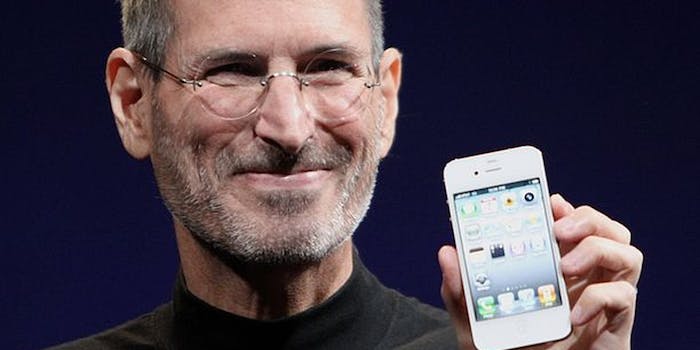 App me to the dark side.

Academy Award-winning documentary filmmaker Alex Gibney is not one to back away from challenging powerful interests.

Gibney took on the American military’s torture program in Taxi To The Dark Side. He shined a light on the sex abuse scandals of the Catholic Church with Mea Maxima Culpa: Silence in the House of God. He set his sights on the politically influential empire of the Koch brothers and their one percent ilk in Park Avenue.

Now, with a pair of new documentaries, Gibney is going toe-to-toe with two of the scariest institutions in American life: Apple and the Church of Scientology. The Daily Dot sat down with Gibney during South By Southwest to talk about the surprising similarities between the two organizations.

In Steve Jobs: The Man In The Machine, which had its world premiere at SXSW this week, Gibney turns a critical eye to the Apple co-founder and his enduring legacy. Gibeny’s film, which The Hollywood Reporter called “unflinching,” is far from a fanboy hagiography. Instead, it’s a warts-and-all look at a man who Gibney portrays as both of a world-class storyteller who single-handedly shaped our digital future and a unrepentant hypocrite who preached the gospel of “think different” do-gooderism while never giving a dime to charity and making it a point to always park his car in handicapped spaces.

When Gibney asked Apple—the richest company in history—they told him they “didn’t have the resources” to help him with the movie.

Apple’s response to Gibney’s interview requests was actually not all that different from the ones he received from the Church of Scientology while in the process of adapting Going Clear: Scientology and the Prison of Belief, Lawrence Wright’s acclaimed exposé into the religion founded by science fiction writer L. Ron Hubbard.

In the cases of both Apple and Scientology, it was a total lack of cooperation from the other side. However, Gibney noted that documenting an uncooperative subject has its own advantages because discovering the points where an organization is reticent to share information is “where you should start digging.”

Going Clear, which premiered at the Sundance Film Festival earlier this year, will air on HBO on March 16. Steve Jobs will air on CNN later this year.