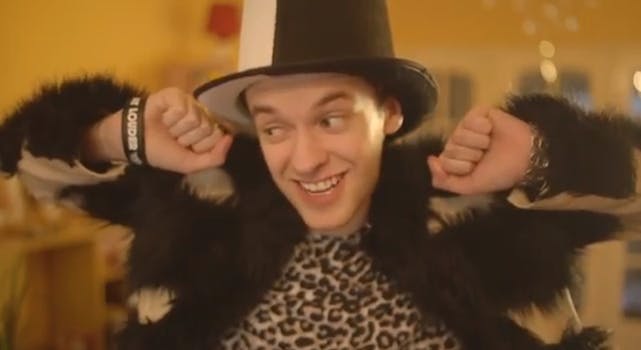 The unsigned musician wants to hit Christmas No. 1 on the U.K. charts.

YouTuber and musician Alex Day needs your help to make history this Christmas.

Day, an unsigned artist, made his start on YouTube six years ago and was previously known for making fun of a little book called Twilight. One of the earliest YouTube partners in the U.K., he has refused to sign with a label.

“I’ve had talks with all the major labels,” Day told Forbes, who called him “the future of music” in June, “but I reckoned they were trying to sign me in in order to squash me; they hate the fact that I proved you can get songs out there without any corporate involvement.”

He defied critics—and the odds—with two Top 20 singles and over 300,000 downloads in the past 11 months. His song “Forever Yours” debuted at No. 4 on the U.K. charts last year, and he now holds the Guinness World Record for the highest-ranking unsigned single.

But this year, he’s aiming even higher, ReadWrite reported.

“I’m releasing a new single on December 16th to try and get to Christmas Number One in the UK,” Day wrote on r/Music. “If I succeed, I’ll be the first ever unsigned artist to get to #1.”

The video for “Stupid Stupid” premiered Tuesday on YouTube. Day dances, hip thrusts, and shakes around his family in a crazy getup as he plays out their day-to-day conversations.

And that’s before he breaks out the mankini.

Day wants to see “Stupid Stupid” beat traditional acts on the U.K. charts and even plans to donate 50 percent of the profit from the song to Save the Children because he doesn’t “wish to be mean-spirited” by competing against charity singles.

The video has had 79,815 views, and with over 14,000 likes, it seems to be a hit with viewers. Not everyone in the comments section seems to be singing his tune, but that’s a mindset Day is able to respect.

The song is currently available for preorder, and physical and digital copies start going out on Dec. 16 with Day hoping his subscribers and fans will be able to launch him to the top of the U.K. charts.