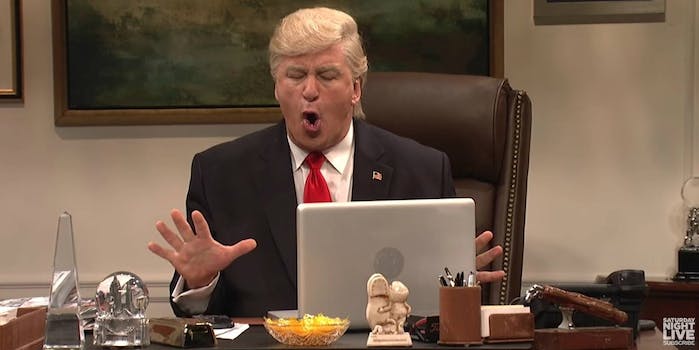 Alec Baldwin to continue on as Donald Trump on ‘SNL’

We bet Donald Trump will be watching.

When Alec Baldwin agreed to impersonate Donald Trump on Saturday Night Live, he probably had little idea that the gig would last into 2017.

But Baldwin’s impression—which obviously grates on Trump’s nerves—will continue this month, because Baldwin told Extra that he’ll return as Trump on Jan. 21, the day after he’s inaugurated as president.

It’s an interesting choice for SNL. In the past two seasons, the show has used Taran Killam, Darrell Hammond, and Baldwin to play Trump. There’s little doubt that Baldwin’s impression is the meanest and most outlandish (Killam’s impression never really got a chance to stick, and while Hammond is probably the most accurate of all, it’s simply not as funny as Baldwin’s characterization).

It’s hard to imagine Baldwin playing Trump for the next four years since he’s not a fulltime cast member. But Baldwin’s shtick is funny, and it seems to annoy the hell out of Trump.

And perhaps that’s what SNL wants to see at the moment, because let’s face it, any Trump publicity is good publicity.