The Archer voice actress uses heavy artillery to show the haters what's what. Aisha Tyler, the voice of femme fatale Lana Kane on the animated series Archer, has a message for gamers who apparently claim she lacks cred: “go fuck yourself.”

Actually, she used the acronym “GFY.” Still, it was the perfect coda to a long and passionate diatribe she wrote late Tuesday evening, in which she described a lifelong passion for video games. Addressing “all the haters out there who claim I don’t play” and “every illiterate racist douchebag on Youtube,” she wrote:

Tyler’s outburst was prompted by the online reaction to her appearance at last week’s E3 gaming conference, where she hosted a major press event for Ubisoft.

“I get invited to E3 because real gamers know I’m a gamer,” she wrote.

“Fuck fame. I do it because I love video games,” she added, noting that she’s voiced characters in two major video game franchises: Gears of War and Halo.

“holy shit woman, i love you,” wrote Saraya May.

“I’ve been seeing a lot of vocal female gamers being attacked lately and I don’t understand the trend. Like douches can scare us out of gaming?” added Rachael Whitaker.

“Hearing you in Halo: Reach was AWESOME! I literally yelled out, ‘Holy shit! Lana is here!’” wrote Amanda LaFranco.

Tyler added a photo of herself holding a replica Lancer—combination rifle and chainsaw—from Gears of War.

“Do not wind her up,” wrote Devin McGauley. “That is a big gun.” 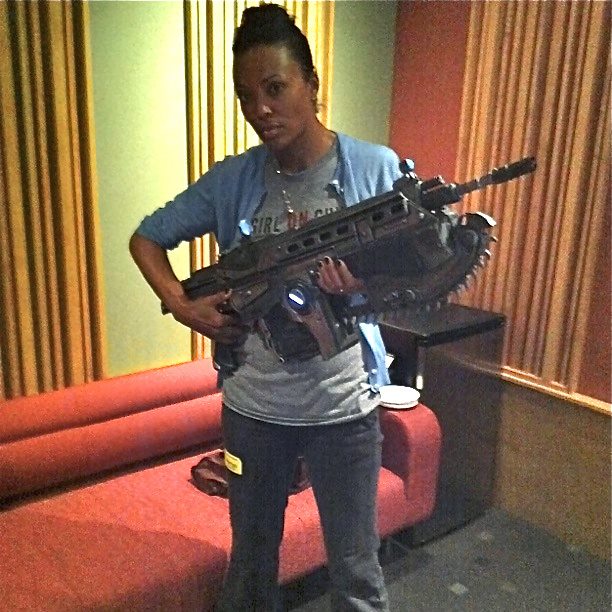