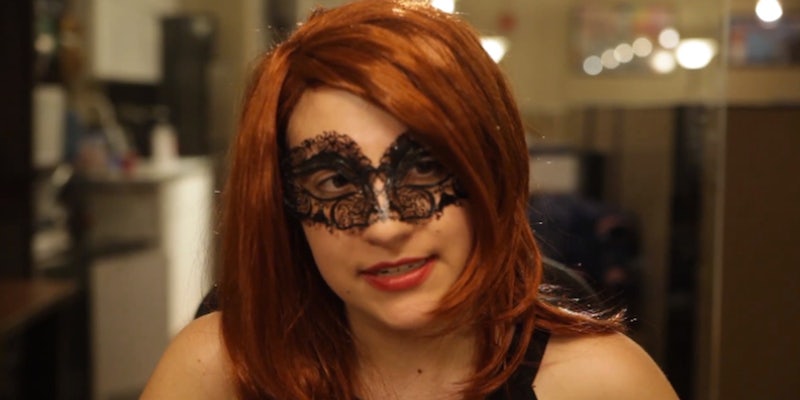 Angelfire wants a female-led superhero movie just as bad as the rest of us.

Lately, there’s been much discussion about female representation in superhero movies, the need for diversity, and how a female-led superhero movie is way overdue. Angelfire knows all about it.

Angelfire, the superhero alter ego of Alison Vingiano, who recently co-wrote and starred in a Her spoof, is trying to get her own movie deal, and faces the usual Hollywood obstacles. Male studio executives diminish her ability to play the lead, suggesting she needs a “co-lead” or love interest to make the movie marketable. They also offer hilariously sexist taglines for the would-be film, like “justice is a bitch.”

“I’ve been thinking about and wanting to see a female superhero — who is strong and smart and a person, not a love interest, sidekick, or archetype — get her own movie for a long time,” Vingiano told the Daily Dot. “My friend Jordan came to me with the idea for Angelfire in the spring. He went to Sundance and worked on a story with Mynette Louie, who runs a production company just for women filmmakers, so he had been thinking about these ideas a lot.

“Meanwhile, I had just seen Godzilla and was angry about the non-roles for women in that film. I thought Jordan’s idea was a clever, funny, feminist parody of Hollywood, so I worked with him on the script and producing the video. We filmed it before Sony announced their woman-led Spider-Man spinoff, but I imagine if Spiderwoman was a real person, this is what many of her pitch meetings would be like.”

All the more reason it’s time for a female-led movie.

Screengrab via The Adventures of Angelfire/YouTube