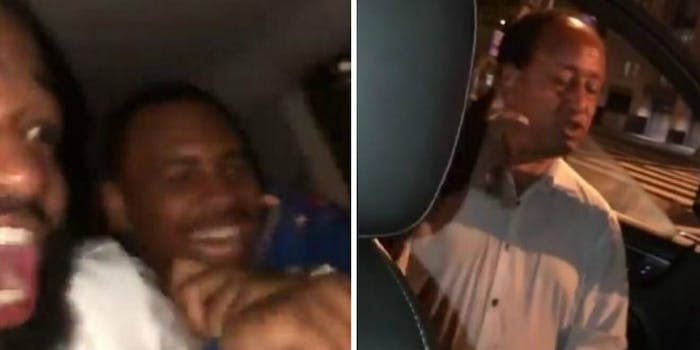 He recorded the video himself.

Adrien Broner, perhaps the most obnoxious and divisive fighter in all of boxing, has been banned by Uber after he recorded himself screaming in a driver’s face and blasting the car stereo.

As reported by TMZ, Broner and at least one other friend were in an Uber earlier this week, and the fighter recorded himself screaming next to the driver’s head before fiddling with the car radio to drastically increase the volume.

You can see in the video below that the driver eventually stops the vehicle and demands Broner and his buddy get out of the car. Meanwhile, Broner laughs giddily.

After the driver stops the car, he said calmly, “You have to leave my vehicle.”

That led Broner and his buddy to burst into hysterics.

An Uber spokesperson told the Daily Dot, “We looked further into the conduct reported and have removed the rider’s access from Uber.” According to the Uber community guidelines, riders and drivers are expected to “respect each other,” “give riders and drivers some personal space,” and ensure “a respectful, safe environment for all drivers and riders.”

Broner is a top-notch fighter, accumulating a 33-3-1 record during his 10-year career, and he’s held world titles in four weight divisions (from junior lightweight at 130 pounds to welterweight at 147 pounds). But he’s lost the most important fights in his career, and at this point, the 29-year-old is mostly seen as a solid but not extraordinary fighter.

He’s also seen by most as an obnoxious figure when conducting interviews, and he’s been in trouble with the law, including charges of misdemeanor sexual battery, robbery, and domestic violence.

His antics, though, bring in big ratings for the Showtime network when he’s fighting on the channel, and he continues to make $1 million paydays whenever he steps into the ring.

Which is lucky, because he probably still has enough money to spring for a taxi when he needs a lift.