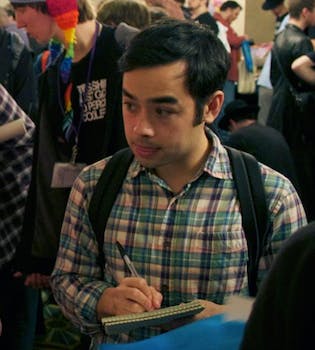 Gawker's Adrian Chen faces unexpected resistance as he probes the secrets of @horse_ebooks.

Adrian Chen’s got his lasso out and damned if he isn’t going to catch the most illustrious stallion on the Internet’s wild frontier—@horse_ebooks.

The Gawker writer has made it his mission to resolve the enigma that is Twitter’s most beloved  spam account. Famous for its garbled absurdisms, the apparent spew of a rogue algorithm, @horse_ebooks hasn’t been blocked by Twitter’s filters. Instead, it’s developed a following of 27,000 since its debut in February.

Several reports—including one by the Daily Dot––traced the user account and domain to a Russian individual named Alexy Kuznetsov (or Alexei Kouznetzov, the transliteration that appears in a companion site’s domain-registration record). After that, Chen became determined to meet this mystery man. Today, he posted a proposition on his Tumblr blog (bold text his own):

“So here’s my offer: I’ll pay someone $50 (1,597 rubles) to go knock on the door at Lenina 11 and report to me what you find there. If you actually discover the truth about horse_ebooks and Alexei Kouznetsov through this visit I’ll give you another $25. Does Alexi exist? Is he aware of the sensation horse_ebooks has become? Is he really making money from this bullshit?”

The offer was quickly increased to $160 after Chen received donations from comedian Jake Fogelnest, journalist John Hermann, and author Rachel Fershleiser. But for all this support, Chen is also receiving pushback from Internet denizens who want to keep @horse_ebooks a mystery.

“@AdrianChen There are forces at work here that should not be disturbed. I advise you to turn back, go home, and forget about @Horse_ebooks,” wrote @corgihugs.

“Attention, Russians: I will pay you $50 to help me stop @AdrianChen from ruining @Horse_ebooks,” wrote @danblondell.

In response to these and other similar tweets, Adrian responded, “What are they trying to hide?”

He also invited people to write to him if they had any idea what was inspiring this pushback—besides the obvious delight people have in mysteries remaining mysteries.

All kidding aside, are the Twitter bots fighting back to protect their own?

Can @horse_ebooks supporters conceal the account’s true form? Or will Chen wrangle this mustang once in for all? It’s a cliffhanger out of a John Wayne Western, with just enough Solaris to make it creepy. We’ll keep you posted.