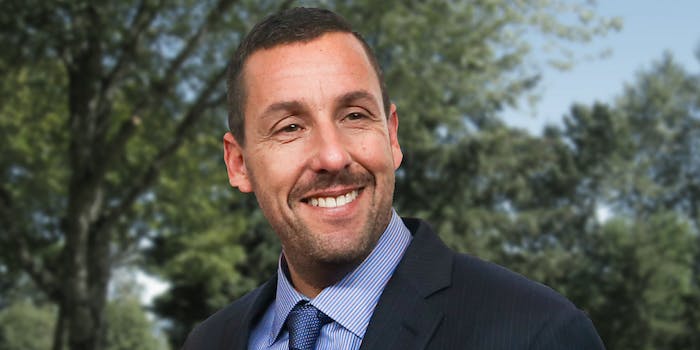 Their reaction is priceless.

Adam Sandler was having lunch in Montreal. Alex and Kevin were taking their wedding photos. After an intro, the comedian got in on the fun.

“We told him we’re huge fans, we love his work, we’ve watched all his films,” Kevin Goldstein told the BBC. “He replied, ‘Good, I’ll take some photos then—mazeltov!'”

Sandler reportedly hung out and chatted up the couple as photographer Sana Belgot went to work. As the photos show, Sandler has been growing a bushy and distracting mustache.

Sandler has been enjoying a career renaissance cranking out original comedy for Netflix, where he’s become ridiculously popular: Last year, the streaming giant said that users have streamed 500 million hours of Sandler’s work. He’s signed to produce eight original films for Netflix. (Sandy Wexler, The Do-Over, Ridiculous Six, and The Week Of are streaming now.)

As far as celebrity wedding photobombs go, however, Sandler’s stunt falls short of Tom Hanks’ similar move and that time a beluga whale crashed the pics.