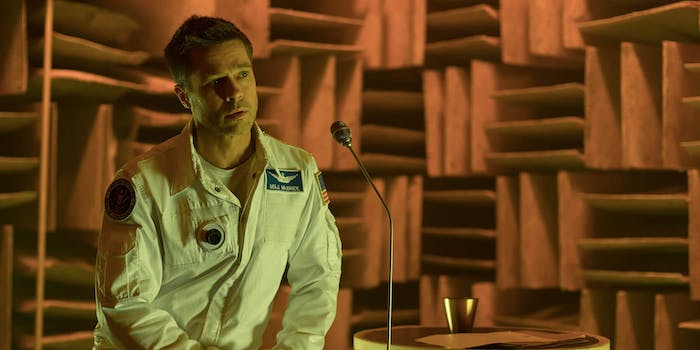 Half space thriller, half drama about repressed American masculinity, it's one of the best sci-fi films of 2019.

In many ways a conventional space thriller, Ad Astra stars Brad Pitt as an astronaut whose father—also an astronaut—went missing 27 years ago. Like director James Gray’s last film, The Lost City of Z, it’s a story about men pushing themselves to their geographical and emotional limits, confronting their own isolation in the process. With gorgeous NASA-inspired production design and a memorably unsettling role for Pitt, it’s one of the best sci-fi films of 2019.

RELEASE DATE: 9/20/2019
DIRECTOR: James Gray
RELEASE: Theatrical
Brad Pitt stars as an astronaut who must find his missing father in order to save the world, confronting his own emotional repression in the process.

Using the familiar structure of a mission to save Earth, Gray and his co-writer Ethan Gross deliver a character study of a man who spends every waking moment behind a masculine facade. Roy McBride (Pitt) is the perfect astronaut, a laconic hero whose heartbeat never goes above 80 beats per minute, even in life-threatening emergencies. He isn’t repressed so much as utterly anhedonic. It’s a gripping yet understated performance from Pitt, who is better known for playing big personalities.

By isolating himself from close relationships, McBride avoids any sign of vulnerability, appearing almost confused when people ask about his feelings. Yet this isn’t a case of a monster lurking beneath the surface. To make an obvious comparison, Interstellar’s world-saving astronaut (Matthew McConaughey) descends rapidly into sweaty, weeping hysteria, while McBride’s emotions are buried so deep he must chisel away like an archaeologist to bring any to the surface at all.

McBride’s work is punctuated by regular psychological evaluations, which we hear in contrast to his inner monologue. During his automated psych tests, he describes himself as functional, well-rested, and ready to do his duty. Asked directly about his father’s long-ago disappearance, he replies by saying that his mother was upset. He sidesteps any meaningful insight into his own emotional state—which is just as well, because in reality, McBride is terrifyingly detached. He’s the perfect astronaut because he thrives in the vacuum of space, locked away behind a reflective helmet.

Plenty of space movies use input from real astronauts, but Ad Astra is particularly interesting to watch after seeing the documentary Apollo 11, featuring archival footage of the moon landing. Buzz Aldrin and Neil Armstrong’s bland vocal cadence and deadpan humor are present among the astronauts in Ad Astra, echoed more superficially by McBride. When he’s not required to interact with anyone, his face settles into a sad-eyed mask. Pitt’s skill for microexpressions goes a long way during exposition scenes, flickering between his public face and the more disturbing emotions he’s learned to hide.

Hollywood loves a conflicted father-son relationship, and Ad Astra takes this trope to its logical extreme. In order to save the world, McBride must confront his long-suppressed daddy issues. Twenty-seven years ago, his father, Clifford (Tommy Lee Jones), led a mission to Neptune, where he and his entire crew went missing. Now Earth is suffering dangerous electrical storms, and Clifford’s mission may have something to do with it. In fact, he may still be alive.

Roy McBride’s job is to travel into space (accompanied by Donald Sutherland, marvelous and menacing as always) and relay a verbal transmission to his father. The obvious problem here is that while McBride seems like a reliable asset, he’s ill-equipped for the task. He’s so out of touch with his own emotions that he doesn’t realize he even wants to speak to his father until he’s been ordered to do so. The closer he gets to Neptune, the more his facade cracks, which in turn makes him less likely to pass a psych evaluation and complete his mission, creating a vicious cycle.

Released during a brief gap between DC/Marvel/Star Wars sequels, Ad Astra is earning extra buzz for being a rare “serious” sci-fi blockbuster. This kind of movie is noticeably scant these days, with last year’s brilliant Annihilation buried on Netflix, following the one-a-year releases of Arrival, The Martian and Interstellar. Yet while Ad Astra is unusual in today’s Hollywood landscape, it may also benefit from being a rarity.

It’s pleasantly jarring to see a star like Pitt give such a complex, intense performance in the context of a big-budget space thriller instead of a traditional drama. But as I mentioned before, Ad Astra is otherwise conventional. It’s a story about a troubled hero (a white man, naturally) who goes on a dangerous quest to save the world. His estranged wife (Liv Tyler) is as one-dimensional as they come, and the film’s other female character (Ruth Negga) primarily exists to share some necessary exposition. So while Ad Astra is more cerebral and thematically complex than, say, Avengers: Endgame, I’m wary of labeling it unique or groundbreaking.

If you want to see a compelling performance from Brad Pitt, Ad Astra delivers in a big way. If you want emotionally complex sci-fi with realistic action and futuristic world-building, you’ll be satisfied. But in the highly niche subgenre of 2019 space movies about masculine isolation, it’s not even my favorite. That honor still goes to Claire Denis’ High Life with Robert Pattinson, a film that shares much of the same imagery, but uses it to a more memorable and arresting effect.