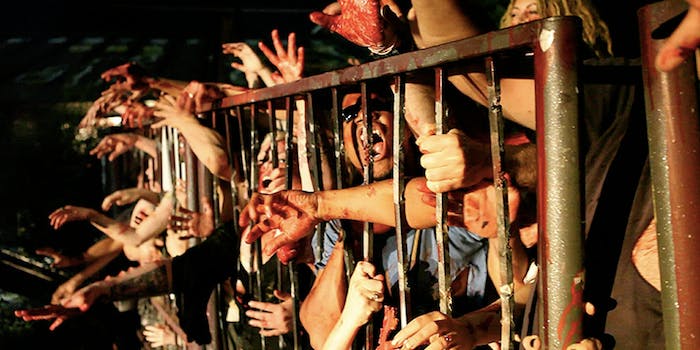 Netflix and eat your brains?

Fall is the perfect season for zombies, and not simply because of Halloween. By the time October rolls around, most people feel like members of The Walking Dead to begin with. The pace of work and school have picked up. Summer is a distant memory. Mint juleps are replaced by Thermoses of coffee or cups of Theraflu. Instead of clearing out of the office early on Fridays, you find yourself trudging in early most days and sometimes staying late. Days get shorter and shorter, and pretty soon your primary source of “sunlight” becomes the glow of your smartphone screen as you frantically check work emails in bed.

Luckily, there is a whole slate of zombie films and TV shows on Netflix and Hulu that aren’t The Walking Dead and will help break you out of autumn’s monotony.

Depending on whom you talk to, the third film in George A. Romero’s Night of the Living Dead series is either the black sheep or the hidden gem. The first film, Night of the Living Dead, is probably the most famous zombie film ever made; it stunned children to terror and had Roger Ebert bemoaning its release before MPAA ratings went into effect. Dawn of the Dead, Romero’s sophomore chapter, with its clever setting of a suburban shopping mall and riff on ’70s consumerism, is considered a classic of the genre.

Day of the Dead is set a year or two after the zombie epidemic, when much of humankind has been devoured or reanimated, and focuses on a group of scientists and soldiers hiding in an underground bunker. Such a premise may not contain enough pure horror for some audiences. The war between humans and zombies is over, and the zombies won. The humans of Day have gotten over the initial horror of seeing a zombie for the first time and have started corralling them for science experiments. At first, Day may seem light on gore and heavy on dialogue, but then the characters start suffering from cabin fever and spend a lot of time arguing about the future. It’s the slow buildup of Day that makes its gruesome, final scene all the more satisfying.

Fans of Shaun of the Dead will find this spirited return to the British horror zombie comedy a welcome viewing. Cockneys vs. Zombies takes place in the zombie-infested East End of London, where our heroes are a gang of sad sack, amateur bank robbers led by slacker brothers Terry (Rasmus Hardiker) and Andy (Harry Treadaway). Terry and Andy decide to rob a bank in order to keep their beloved grandfather Ray’s (Alan Ford) retirement community from being demolished by developers. They manage to recruit their cousin Katy (Michelle Ryan) as well as criminal Davey “Tuppence” (Jack Doolan) and an ex-soldier known by the name of “Mental Mickey” (Ashley Bashy Thomas) to join their heist.

Predictably enough, this inept crew’s bank robbery quickly falls apart and the police are called. Luckily (or unluckily), the police sent to intercept the gang are devoured by zombies. After coming to terms with the grim reality of a zombie takeover, the group decides to perform a rescue mission of the retirement home. If you think a group of septuagenarians sounds like easy prey for zombies, you’d be hilariously mistaken.

You couldn’t ask for a more literal take on the “zombie as white-collar office worker” metaphor than a zombie infestation that actually takes place in the office. Stalled is one of those campy zombie comedy flicks that gets points for its unlikely hero (an office janitor) and even more unlikely setting (a ladies restroom).

Writer Dan Palmer stars as W.C., a janitor tasked with the unenviable job of cleaning up as the office holiday shindig ensues. But the tides quickly turn when the festivities get interrupted by the undead. W.C. is forced to hide in the cramped quarters of a restroom stall as the newly zombified office workers lurk nearby. His only source of companionship is surviving office worker Heather (Antonia Bernath), whose voice he can hear behind a wall. By rarely stepping out of the ladies restroom, Stalled is a novel twist on typical zombie fare.

Zombie films often try to depict the far-reaching scale of the invasion with scenes of public gathering places flooded with the walking dead: zombies trudging along the dark corners of the subway or lurking in ransacked grocery stores. But by operating within the narrow confines of a restroom, Stalled bravely goes where no zombie film has gone before—which is practically nowhere at all.

It’s hard to imagine a more dire interruption to your weekend getaway than a horde of Nazi zombies. Leave it to Norwegian director Tommy Wirkola to figure out a way to out-evil the classic zombie: by reanimating those who were evil when they were alive.

Dead Snow follows a group of medical students whose snowy respite in the Norwegian mountains is put to an end by Colonel Herzog and his zombified S.S. henchmen. If this sounds like a shaky premise, even for a zombie movie, you’re right. Luckily, realism has never been one of the genre’s strong points. Dead Snow is not meant for those who like a cerebral bent to their zombie films; there are no heartrending monologues about the importance of teamwork or nuanced insights into the human condition. There are guts and gore—and plenty of both.

Yes, a sequel was made to the outrageous Norwegian horror flick about Nazi zombies. Dead Snow: Red vs. Dead takes us out of the Norwegian woods and into civilization. Martin (Vegar Hoel), the first film’s sole survivor, wakes up in the hospital to find the police suspect him of murdering his friends. To make it worse, the hospital’s surgeons have mistakenly replaced his arm, which was severed in the first film, with that of the zombie Colonel Herzog. In short, Martin has seen better days. Luckily, a group of American “zombie hunters” (Martin Starr, Jocelyn DeBoer, and Ingrid Haas) soon arrive to help him stave off Norway’s ensuing zombie epidemic.

Is this somehow a more outrageous, awful-sounding premise than the first Dead Snow film? Without a doubt, yes. But something about Dead Snow 2 manages to work, despite all signs that it shouldn’t. Maybe it’s the surprisingly witty dialogue. Maybe it’s the act of moving Nazi zombies from the snowy mountains to an actual city, where their inanity as a concept is more hilariously apparent. Or maybe it’s that Dead Snow 2 ends up being a weirdly absorbing hybrid of American and Norwegian zombie film, with the inclusion of American characters that serve as a parody of the genre as it’s depicted in the States. Either way, you leave the end of Dead Snow 2 with a sense of enjoying it, despite not knowing exactly what it all meant.

If you ever wondered what a zombie film looked like from the walking undead’s POV, this effort by first-time director Matthew Kohnen is sure to satisfy your curiosity. More a stoner comedy starring zombies than an actual horror flick, Aaah! Zombies!! is unlikely to send chills down anyone’s spine. The film’s premise is laughably stupid, which is one of its charms: A truck carrying bio-hazardous waste gets into a road accident near a bowling alley. One of the containers rolls away and leaks onto some boxes of ice cream mix the bowling alley stores outdoors. Tim, the bowling alley’s assistant manager (Michael Grant Terry), decides to make the ice cream anyway, despite its unearthly green shade. After Tim and a whole slew of bowling alley employees and customers decide to eat the suspect green ice cream, they promptly become zombies. But because the film’s heroes aren’t the brightest to begin with, they think they’ve reanimated into superhuman soldiers instead. Aaah! Zombies!! is campy, brainless (no pun intended) fare, ideal for those who crave a cheap zombie B-movie without the scare factor.

The first major studio film about zombies was a critical failure. After the release of White Zombie in 1932, critics were unanimous in their lack of regard for the feature starring Bela Lugosi. White Zombie was a runner-up for Vanity Fair’s Worst Film of 1932, but ended getting beat by Blonde Venus. Time magazine said Lugosi looked like a “comic imbecile” in his portrayal of Legendre, an evil voodoo witch with the power to turn humans into zombies.

Set in Haiti, White Zombie follows a couple of New Yorkers (Madge Bellamy and Robert Frazer) who want to tie the knot in Port-au-Prince. The couple meet a wealthy plantation owner, Charles Beaumont (Robert Frazer), who insists they host their nuptials at his estate. If that isn’t awkward enough, Beaumont falls in love with Madeline, the female half of the pair, and recruits Legendre to help turn Madeline into a zombie. White Zombie is, by all accounts, a bad film. But more than 80 years after its release, the film has become an absorbing artifact of racial and social anxieties in the 1930s.