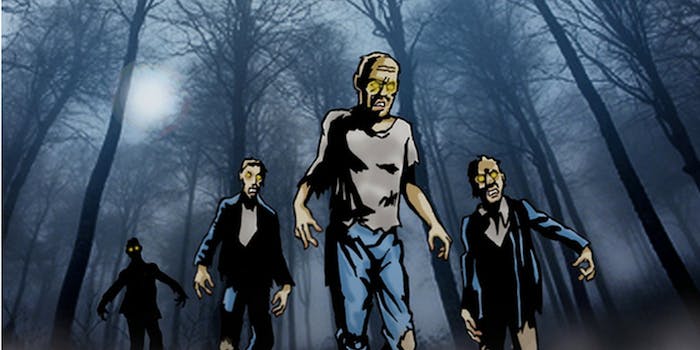 The real zombie apocalypse is taking place on Kickstarter, where users are trying to fund bizarre movies, video games, and fashion accessories for the undead.

Sprung from the chaos surrounding May’s violent, bizarre, and zombie-esque attack on 62-year-old homeless man Ronald Poppo, Kickstarter has seen a rash of new zombie-centric campaigns sprout about. Over 30 are currently active and seeking funding, and many exhibit the expansiveness, gore, and downright unique nature that comes with centering a campaign around a group of undead individuals who feed on the flesh of those still living.

What’s truly strange, however, is that this trend is nothing new within the Kickstarter community. There have actually been 393 projects in total that center around the undead and their exploits. And while some have been tremendously successful, others have bombed with nary a raised eyebrow from anybody besides the project creators and their patient spouses.

In light of the recent zombie apocalypse onto the Web, the Daily Dot hand-picked five projects in particular that deserve our attention and your money.

1) Mennonite of the Living Dead

A man in Pittsburgh, Pa. wants to merge two timeless punchlines (Amish and the undead) into a three-part comic series about seven teenagers in Dutch Country, Pa., who get lost in the woods after dark and set upon by a team of Mennonite zombies from the Clan of Ezekiel.

Zombies have been domesticated by humans in the aftermath of 2013’s anti-climatic zombie apocalypse, which did not go according to zombie plan. Instead of taking over the world, these zombies are now subject to competing in Zombie Pageants, beauty patents that have replaced the living’s “dead hobby of dressing up their toddlers.” The story of Zombies & Tiaras follows Julio Eduardo Suarez—and his recently adopted zombie Alberto—on Suarez’s mission to appease his dying father and win the National Zombie Pageant.

The zombies in this project aren’t undead humans but rather undead squash—yes, the vegetable. Those squash look to feast on a rabbit named Jack Stompingtail, who the player will have to navigate through the treacherous zombie garden with only a backpack of carrots, zucchini, and items of vegetation at his disposal. The highlight of this project: Those squash are led by the legendary George A. Romero, the man behind such film classics as Night of the Living Dead and Dawn of the Dead and long considered to be the godfather of all zombies.

4) Escape from Zombie U

Zombies have taken over fictional Wailliams College’s student body, and English professor Melody Farrington is the last to make it out alive—or so she hopes. Farrington’s stacked with an arsenal of school supplies to serve as her defense system, but between 10 levels and a hoard of zombies looking for a fresh snack, she’s up to quite the test. Thanks to Farrington’s skimpy outfit and tendency to, um, bounce herself around, this should be a popular one among the crowd that thinks there’s love to be found within a video game.

A clothing line for zombies that want to look good while feasting on the flesh of the human race, Zombi Kitchen offers an arsenal of T-shirts and kitchen-centric clothing focused on brains, the purported delicacy of the undead race. (Yes, we know that zombies don’t actually crave a plate of brains.)