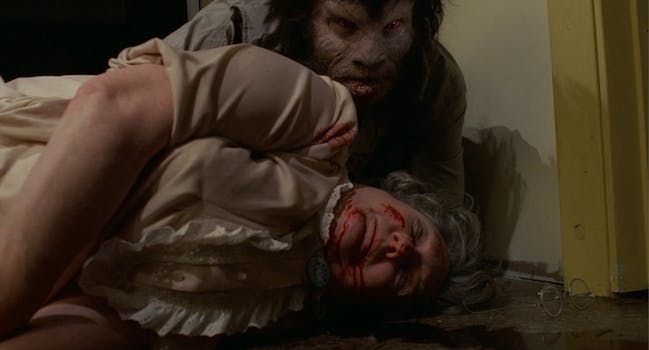 31 days of Halloween movies to binge this October: Week 4

Welcome back horror hounds! It’s week four of our 31-days of streaming Halloween movies binge. This week we’re throwing it back with seven classic films from the ’60s, ’70s, ’80s, and ’90s–each more horrifying than the last. You’ll find zombies with a message, a Halloween party from hell, and a lost classic comedy waiting down the lane. So pop some corn and pour yourself some orange soda. It’s time to watch some horror.

Waxwork is the sort of film that built its entire reputation via word of mouth back in the days before the internet. A group of kids decides to go visit the new wax museum in town, only to discover each exhibit is a portal to a world of monsters. Shot like a Twin Peaks episode about inter-dimensional horror, Waxwork deserves to be discovered by a new generation. Make room for this classic in your streaming Halloween movie marathon. Loving made, brilliantly staged, and dripping with as much creativity as blood, Waxwork is the definition of “cult horror.” It’s also perfect for last-minute Halloween costume ideas.

Few movies are as scary today as when they were released, but George Romero’s classic zombie tale isn’t just any movie. Made for pocket change during a time of racial and social upheaval, the movie’s messages hold up heartbreakingly well over 50 years later. The premise is simple: a sudden unexplainable uprising of violence by the recently deceased. Buried under the black and white gore is an examination of the fractures in America that keep us fighting each other even when death is outside our door. Truly terrifying, yet oddly reflective, Night of the Living Dead is one of the best American films ever made.

The ’80s were a magical time for practical effects, with puppets and stop motion monstrosities causing chaos for unsuspecting teens everywhere. Deadtime Stories is a treat for makeup obsessed horror hounds in this three story spine-tingling anthology that mines fairy tales for spooky delights. Killer witches, Red Riding Hood, and “Goldie Locks” all come out to play, but the fun starts from the first frame with its deliciously campy title sequence. This is low budget ’80s horror at its most fun.

Halloween is a time for scares, but it’s also a great time to catch up on important pieces of horror history. In 1972 playwright Bill Gunn was approached to make a “Black vampire movie.” Having no desire to make that film, he took the $350,000 budget and made Ganja & Hess. Using vampirism as a loose metaphor for addiction and the struggle of Black assimilation into white culture, Gunn crafted an unforgettable tale of the beyond. Go in blind, keep an open mind, and thank the heavens Shudder streams important films like this.

It may be hypocritical to recommend a movie about TV addiction while telling you to watch 31 movies. Of course Stay Tuned isn’t just any movie. Starring the legendary John Ritter, this unsung 1992 black comedy follows a husband and wife who get dragged into a cable package from hell after making a deal with the devil. Binge watchers who’ve never had a cable package might be surprised by just how much they’ll relate to this film. Darkly funny and featuring the last original cartoon by the legend Chuck Jones, Stay Tuned is the only PG film that makes sense on this list.

Going into any movie with too much information can be a bummer. Doing it with Dead and Buried could ruin the film. Trust us and go in knowing as little as possible. Tourists are being murdered in a small fishing town and the local sheriff sets out to learn why. Divulging any more would spoil the fun. Gore legend Stan Winston provided the skin crawling kills, but the fairytale aura director Gary Sherman brings is the real star. A major ’90s horror movie stole its twist. Part of the fun is seeing when you can figure out which one it is. This is the sleeper addition to any streaming Halloween movie marathon.

What services will you need to take part in streaming Halloween movie marathon?