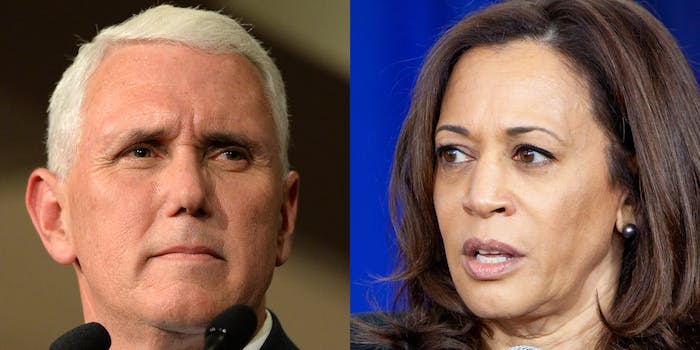 It's Pence vs. Harris in Salt Lake City on Wednesday night.

Where to stream the Vice Presidential debate

What is the debate format on Wednesday?

Wednesday’s debate will cover nine topics, covered in ten-minute blocks, with each candidate getting two-minute response times. Will those be uninterrupted responses, though? Both Pence and Harris will be seated, and they’re less bellicose than their Presidential candidate counterparts, so actual discourse is certainly possible.

(If you were disheartened by the tenor of the first Presidential debate, this one might be more to your liking. Then again, there’s been pre-debate debate about whether to allow for Plexiglass dividers to protect the candidates from a certain virus that’s been in the news. They’ll also bee seated more than 12 feet apart in an effort to minimize risk.)

There will also be, as in the first Presidential debate, a limited audience allowed into the venue to watch.

Which channels will carry the Vice Presidential debate?

You’ll also have options via PBS (through Amazon Prime Video), Roku, and YouTube as well.

Hulu Live TV sets you up with local channels and has a broad spectrum of entertainment and sports channels to review, including the full suite of ESPN channels, Cartoon Network, FX, HGTV, and even deep cuts like National Geographic and Syfy. You can stream CNN, Fox News Channel, and MSNBC on Hulu Live TV, as well as the local channels you usually get. It’s primed for you to find your preferred Vice Presidential debate live stream.

You can find the Presidential debate live streaming on CNN through Sling Orange. Sling Blue will stream the Vice Presidential debate via CNN, Fox News, and MSNBC. If you use Sling with Air TV, you’ll also have access to your local channels; check out our Sling TV guide for more on that.

With the exception of C-SPAN and CNN, you have plenty of options for a Vice Presidential debate live stream.

If you’re already looking to AT&T for your wireless needs, you might consider AT&T TV Now to cover streaming for you. AT&T TV Now channels start with Plus and Max, which even include HBO. Then, AT&T plans expand from there, approaching cable selection and pricing with AT&T TV Now’s biggest packages. AT&T streaming also comes with Cloud DVR, letting you record up to 20 hours of TV per month. Even C-SPAN’s available to stream the Vice Presidential debate on AT&T TV Now. If there’s a channel you want, there’s likely an AT&T TV Now plan that will get it to you.

If you’re looking for a Vice Presidential debate live stream, you have options galore on YouTube TV.

Vidgo offers a package for under $40 a month that pulls together more than 60 English-language channels into its National English Package. The package of Vidgo channels include ABC, Fox, and the ESPN family (including ESPN Deportes). It’s also one of the few streaming services that carries BeIN Sports. But it’s like Fubo in that, even though it started out for streaming sports, it carries a lot more now. Vidgo not only offers options for Vice Presidential debate live streaming, it provides a Social TV platform that lets you voice your thoughts to other Vidgo streamers.