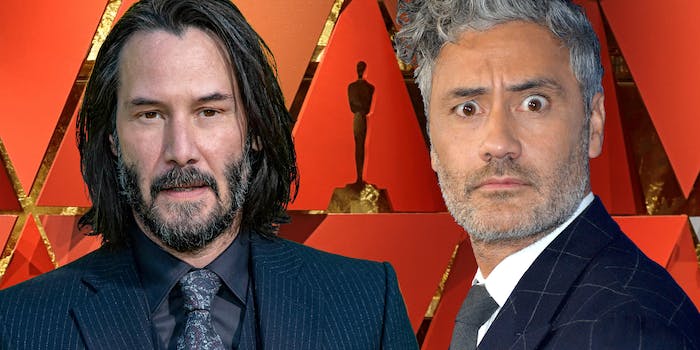 Here are all the presenters for the 2020 Oscars

Keanu Reeves, Taika Waititi, and more will present at the 2020 Oscars.

The Oscars are once again without a host, which actually did make it feel less like an endurance test last year. But the presenters have been announced, and they are a more than adequate replacement.

The countdown is on! Welcome some of our incredible #Oscars presenters. pic.twitter.com/mmGi16Xu8S

The countdown continues! Announcing some more of this year's #Oscars presenters. pic.twitter.com/eohNx16hJr

The final countdown! Here is the latest round of #Oscars presenters. pic.twitter.com/QOVAvRG1eL

Let’s welcome to the #Oscars stage our last round of presenters! pic.twitter.com/WB4H2zscVm

Waititi responded to the announcement on Instagram, saying, “Lolz. Didn’t think there were any bridges left for me to burn.” However, the Jojo Rabbit director will likely pick up best adapted screenplay—and maybe more. “Are you presenting Best Adapted Screenplay?” joked director Edgar Wright.

Are you presenting Best Adapted Screenplay?

People seem to be very excited about Keanu Reeves presenting, even advocating for some of his past work at the podium. Honestly, he was snubbed for his work in Always Be My Maybe.

And people had fun with the Oscar/Oscar thing.

The Oscars air Sunday, February 9. Here’s how to stream all the nominated films.