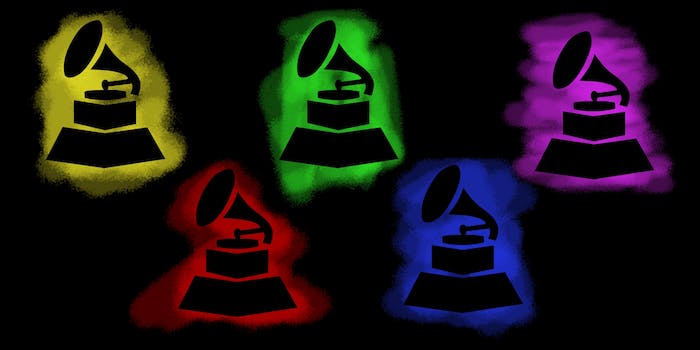 The must-listen music from the 2014 Grammy Awards

Here's a 91-track sampler of the best music this year’s Grammy Awards has to offer.

Everyone except indignant rappers knows that the Grammys have a rich history of being behind the times. I mean they’re still nominating Ludwig van Beethoven. Sunday’s 56th annual ceremony will no doubt award the wrong winners, but it will also feature strong performances that blend reunion pomp with breakout circumstances.

The next Mumford & Sons or the next Ricky Martin could steal the show with a deft combination of competent execution and pretty lights.

If it sounds like I’m hating, that’s only halfway the case. I love the Grammys. My lightbulb realization dates back to the 2001 Grammys, when Album of the Year went to Steely Dan’s Two Against Nature (the coke-rock pioneers’ 20-years-later comeback album) and not Eminem’s Marshall Mathers LP (one of the 10 best American rap releases in Western history). Alright, I thought, the National Academy of Recording Arts and Sciences doesn’t know anything, but it’s not their responsibility to be hip.

In reality, I was the tool—taking the time to drop snark on the Grammys in my college newspaper with the self-importance of an English Lit TA.

The history until Em’s snub is considerably more tragic: relegating rap to off-air awards, rewarding Puff Daddy over the Wu-Tang Clan, and Jethro Tull’s Best Metal Performance Grammy. The list stretches out further than the red carpet.  Grantland’s Steven Hyden spelled this out last year in a fantastic essay:

Take the first Grammys show, back in 1959. The awards were set up to honor the best music of 1958, which ended up being a pretty unbelievable year: There was Chuck Berry’s “Johnny B. Goode” and Jackie Wilson’s “Lonely Teardrops” and Eddie Cochran’s “Summertime Blues” and Link Wray’s “Rumble.” Seriously, that’s just 10 minutes of what was momentous in ’58. Three months before the inaugural ceremony, an airplane carrying two of music’s brightest young stars — Buddy Holly and Ritchie Valens, plus novelty singer the Big Bopper, the Macklemore of his day — went down in Iowa, killing everybody onboard. You can only imagine how stirring the Grammy tribute was to those guys, in addition to the performances by all the future legends on the bill. Oh, wait — none of those people was invited. There was no tearful ceremony for Holly and Valens. Instead, Domenico Modugno was honored in the Record and Song of the Year categories for “Nel Blu Dipinto Di Blu (Volare).” The Album of the Year went to Henry Mancini for The Music From Peter Gunn.

The Academy has made an effort to honor younger artists recently. The last four Album of the Year gramophones have gone to Taylor Swift, Arcade Fire, Adele, and Mumford & Sons. That’s Starbucks swag you and I can believe in.

But enough about who will win that shouldn’t (Imagine Dragons, probably). The Grammys are a night out for big music and the performances are interesting if flat and ridiculous. More importantly, it’s an opportunity for cold-hearted listeners to scroll through the nominations, find gems, and see what was really good on these pop streets.

If you spend too much time listening to trendy indie rock like me, Clear Channel doesn’t regularly transmit its legion of stations into your sonic sessions. That’s great here, because singles from Bruno Mars, Rihanna, Kacy Musgraves, and Sara Bareilles aren’t over-cooked nuisances yet. Grammy season allows unfiltered appreciation for music that connects people. It also has a wide lane of roots, mariachi, jazz, gospel, Latin fusion, and R&B that plays out like a rewarding hike. Let’s go up the mountain together.

Here’s my attempt to find value in genres I generally discard: Christian rock, mainstream country, smooth jazz. It’s a 90-track sampler of the best music this year’s Grammy Awards has to offer.