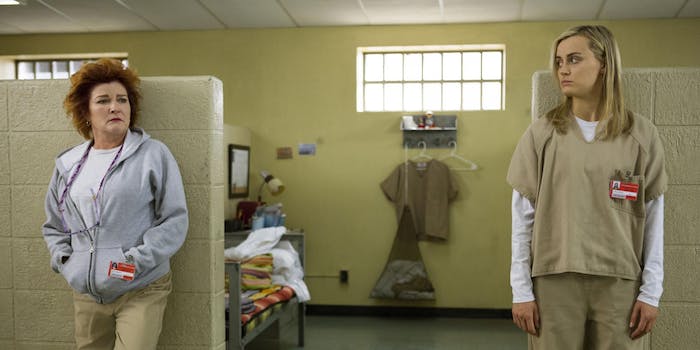 What are Netflix’s chances at the Primetime Emmy Awards?

For those pioneers who see the Internet as the broadcast delivery medium of the future, all eyes Monday will be on which made-for-the-Web series score Emmys.

It’s called “television’s biggest night,” and for those pioneers who see the Internet as the broadcast delivery medium of the future, all eyes Monday will be on which made-for-the-Web series score Emmys.

While somewhat disappointing, the 2013 Emmy success of Netflix’s House of Cards brought over the top programming into the spotlight. While a number of armchair pundits felt the show was robbed, the breakthrough House of Cards became the first non-network show to be nominated for an Emmy and was a likely catalyst for Amazon, Hulu, and others to increase their output of original shows.

Getting our scorecards ready for 2014’s awards show, Netflix is poised to make the leap from being considered to being a big winner. The streaming network makes a healthy showing among the nominations with a few, such as Orange Is the New Black, already going into the big night with statues in hand. In order to keep the Aug. 25 telecast down to a reasonable timeframe, the Creative Emmy Awards were handed out Aug. 16 at L.A.’s Nokia Theater. At that ceremony, Orange scored creative wins for Oza Aduba (Outstanding Guest Actress, Comedy) as Crazy Eyes) and Outstanding Casting for a Comedy Series. A complete list of winners—digital and otherwise—are available at the Emmy website.

You can find online and offline scorecards everywhere that invite viewers to play along with host Seth Meyers, but let’s create one specific to categories and entrants featuring Web-related content. For the sake of those of us with short attention spans, we’ll stick to the big-money categories.

Predicted winner: McConaughey. The film and TV insiders love him. Spacey is a longshot; 2013 was Cards’ window for awards.

Outstanding Writing for a Drama Series

Predicted winner: Breaking Bad. A parting gift for one of cable TV and social media’s most popular, buzzy shows.

Predicted winner: True Detective. Yep, another HBO gem that is loved by audiences and critics alike.

Predicted winner: I’ll go out on a limb with this one. Falco should win, no question, but the award will go to Schilling as OITNB’s first win of the night. After a mediocre first season, Schilling upped her game in season 2, really digging into the highs and lows (mostly lows) of her character’s life-altering time in prison.

Predicted winner: Easy one. William H. Macy because he is just a great actor, and I’d watch him read the Yellow Pages.

Predicted winner: Mulgrew. One of the more veteran actors in OITNB, she nails the role as the crusty Russian matriarch at Litchfield. Season 2 gave her some wonderful scenes and dialogue, and she came through.

Outstanding Writing for a Comedy Series

Orange Is the New Black versus Episodes, Louie, Veep, and Silicon Valley.

Predicted winner: Another Orange win. If Silicon Valley (from HBO) wins, I demand a recount.

The impact of Web-delivered TV in the past year can be felt in some other categories. My favorite show of the season, Luther, is up for three Emmys this year. The show is a BBC production, but much of its current popularity is owed to its distribution via Hulu.

The Square, a documentary distributed by Netflix about the 2011 Egyptian Revolution, won four Creative Emmy Awards including Outstanding Documentary or Non-Fiction Special.

Netflix’s Brave Miss World was nominated for Exceptional Merit for Documentary Filming but lost to HBO’s Life According to Sam. Brave Miss World is the compelling story of Miss Israel/Miss World’s mission to shed light on the issue of rape after become victimized during a photo shoot in Milan.

While we’re at it, we cannot overlook the power that YouTube virality has for such Emmy Award-nominated cult shows as Portlandia. If you haven’t seen the bit about ordering chicken in a Portland restaurant, you may be alone.

After the dust settles, and the last post-award-party kale chip is devoured, we’ll take a look at what social media had to say about the winners and losers on Emmy Night.