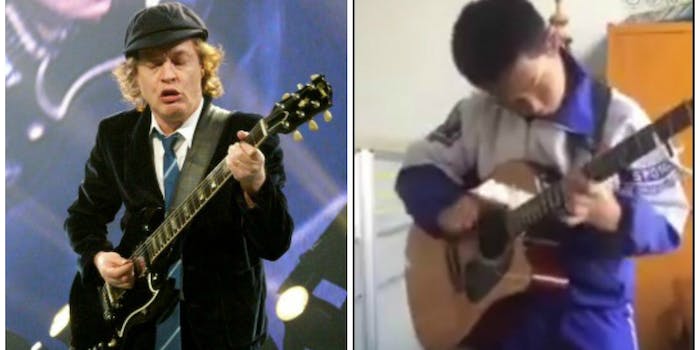 Eat your heart out, Angus Young.

For those who want to rock, there’s not really a better aphrodisiac than AC/DC’s “Thunderstruck.” That opening guitar riff, the background chanting, and the slow buildup to singer Brian Johnson’s gravely nasal voice makes it the perfect blood-pumper. Or the perfect ringwalk for a champion.

But as this 13-year-old dude from China can attest, you don’t need pyro or a monstrous kick drum or 15,000 fans in an arena chanting “Thunder!” to make this a powerful anthem. Hell, when Liu Jiazhuo plays it, you don’t even need an electric guitar.

The acoustic will work just fine, thanks very much.

The fact Liu can play the Angus Young guitar lick and the Chris Slade drum beat at the same time—along with some improvised percussion there near the end—is an impressive display of musicality. Liu was actually covering a Luca Stricagnoli cover of AC/DC’s 1990 classic, and here’s a more complete version on YouTube.

If you look at Liu’s YouTube page, you’ll find him covering the works of overly talented acoustic guitarists. But based on the AC/DC covers from above, we can say this unequivocally: He is one hell of a shredder, and he’ll rock you hard as you’re driving the highway to hell.