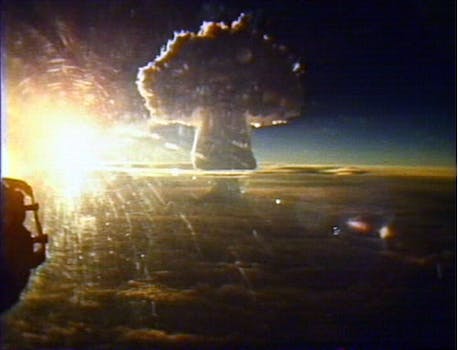 The 10 videos you should watch before you die tomorrow

The Daily Dot put together a list of the top 10 videos that help illustrate the history of our planet’s last great medium: the Internet.

If you had less than a day to live, what would you watch?

According to the ancient Mayans and their limited calendar-making resources, the world will come to an end on Dec. 21. With our history and culture facing total annihilation, we at the Daily Dot put together a list of the top 10 videos that help illustrate the history of our planet’s last great medium: the Internet.

YouTube and other video sites have brought the world together, offering everything from entertainment to inspiration to, of course, memes.

Why not kick off the guide to world-changing videos by providing a nod to the media that preceded the Internet?

Set to Symphony No. 4 in G Minor as performed by the SWR Symphony Orchestra under the direction of Ernest Bour, this 13-minute-long video compiles footage of major events from 1905 through 2004, a year before YouTube was launched.

Beginning with footage of a young Albert Einstein, the video traces the unfolding of world history as told by film and television. Included are the Titanic, Al Capone, the Hindenburg disaster, the bombing of Hiroshima and Nagasaki during World War II, Martin Luther King Jr.’s “I Have a Dream” speech, and the September 11 attacks.

On the surface, “Me at the Zoo” doesn’t appear too impressive. The footage, clocking in at a whopping 19 seconds, shows a young man explaining the length of elephants’ trunks at the San Diego Zoo.

This was the first video ever uploaded to YouTube.

Everything from “Gangnam Style” to the overabundance of cat videos out there owes its life to this short clip and the young man therein, who is none other than YouTube co-founder Jawed Karim. While uploading tools and sharing sites existed prior to April 2005, YouTube revolutionized the way people watch, share, and popularize videos.

Prior to 2005, Matt Harding was just another world traveler who liked to preserve the memories of his trips with video. During trips to Vietnam (2003) and Africa (2004), friends suggested that Harding dance in the center of the frame, with the breathtaking scenery of his location on display in the background. He agreed, spliced together 15 different dance scenes, and set it to the song “Sweet Lullaby” by the French music group Deep Forest.

Harding’s simple dance videos went viral even before the advent of YouTube, spreading via email and his website. The footage from his 2003 and 2004 trips earned over 20,000 hits per day. In 2006, he uploaded his footage to YouTube, where it has since become an annual favorite.

Harding travels around the world each year, dancing with residents of the cities and countries he visits.

The Flash cartoon site Homestar Runner exploded on the Internet in 2001. Its title character, a dimwitted yet lovable marshmallow, lived in the land of Strong Badia with the site’s fellow breakout star, wrestling-mask-covered Strong Bad, and a host of other odd, eccentric characters. From celebrating the holiday of “Decemberween” to creating their own Flash cartoons, the gang enjoyed Internet fame for almost 10 years.

Matthew and Michael Chapman, the minds behind Homestar Runner, created much more than an absurd, relatively SFW cartoon series. A great deal of Internet memes originated on the Homestar Runner site, such as the one-armed dragon “Trogdor the Burninator.”

The Strong Bad email cartoon “Video Games,” uploaded in 2004, is the origin of the massively popular Internet word “asplode,” a poorly translated version of “explode.” It first hit the Internet as part of Strong Bad’s 3D vector game, uttered by the game’s antagonist (Strong Bad’s giant floating head) when the main player is killed.

“Asplode” and “Your head asplode” have appeared in countless online forums and message boards and are widely used phrases for pictures and videos of exploding objects.

The world is ending next week. Why not go back and Rickroll yourself (or one of your friends) one last time?

“Rickrolling,” the act of redirecting a normal-seeming link to Astley’s 1987 music video for “Never Gonna Give You Up,” began on a 4chan thread in 2007. According to Know Your Meme, the first people to be Rickrolled were 4chan users who believed they were accessing a link to the then-new video game Grand Theft Auto IV.

The meme quickly found its way beyond 4chan, spreading not only across the Internet, but into the real world as well. Everyone and everything—from a crowd of New York Mets fans to the Oregon House of Representatives—were Rickrolled during the height of the meme’s popularity (roughly 2007 to 2009).

Astley himself embraced the newfound fame. He even self-Rickrolled the 2008 Macy’s Thanksgiving Day parade in New York City.

In 2007, YouTube user HDCYT uploaded an innocent video of his two young sons, Harry and Charlie. Bouncing his younger brother in his lap, Harry sticks his finger into the mouth of the toddler—who promptly bites it.

Prior to 2007, this video would have never found its way out of the British family’s home movie collection. Thanks to millions of YouTube users enamored of Charlie and Harry, however, “Charlie Bit My Finger—Again!” went on to become the most-viewed YouTube video that was not professionally produced.

By 2012, “viral video” was a well-known term and the potential reach of online videos was understood to be powerful.

The organization Invisible Children decided to test those waters with its video “KONY 2012.”

The video, a 30-minute documentary shot by filmmaker Jason Russell, details the mass genocide taking place in Darfur, Sudan. It exposes the use of children as soldiers and sex slaves by Ugandan guerilla group leader and head of Lord’s Resistance Army Joseph Kony. The video’s intent was to arrest Kony and remove him from power by the end of 2012.

The organization’s “viral” tactic worked. Between Vimeo, YouTube, and other sites, “Kony 2012” was viewed over 50 million times within days of its February 2012 release. Celebrities, including Justin Bieber and Diddy, responded to the video and pledged to lend their support to the cause.

The video is a notable and remarkable example of the wide reach and power of the Internet. But what the video actually accomplished? A different story.

When Laina Morris uploaded “JB Fanvideo” to YouTube in June 2012, she probably felt that she was doing little more than submitting her entry for Justin Bieber’s online “sing-off” contest. To the tune of Bieber’s song “Girlfriend,” Morris sang her own lyrics that painted her as a clingy, suspicious girlfriend.

She had no idea that she was creating the Internet’s latest meme.

The combination of her lyrics and insanity-tinged eyes led her fellow Internet users to dub her the “Overly Attached Girlfriend.” Instead of regretting the video posting, Morris embraced her notoriety. She kept fans updated on her life through Twitter and Facebook and even performed charity work.

“JB Fanvideo” was an example of exactly how a video’s spread can result in celebrity status for some folks—whether they want it or not.

In October 2012, Austrian skydiver Felix Baumgartner broke the world record for highest skydive when he successfully plummeted 24 miles to Earth.

Footage of his speedy descent, which broke the sound barrier, also resulted in a new record: most-watched live streaming event. More than 8 million people watched the jump on YouTube alone, with millions more watching via corporate websites like The Discovery Channel and jump sponsor Red Bull.

From the breathtaking views of Earth to the overall inspirational feat, the front-row seat to the unprecedented ride should not be missed by anyone.

Admit it. You knew this one was coming.

In July 2012, the video of Korean pop star Psy performing “Gangnam Style” was uploaded to YouTube. Its catchy electropop and “galloping” dance style was embraced by the Internet and the song quickly went viral. Parodies and homages popped up everywhere. Psy himself became an internationally recognized music star.

In a few short months, the video successfully surpassed Justin Bieber’s music video for his hit single “Baby” in popularity, earning close to a billion views.