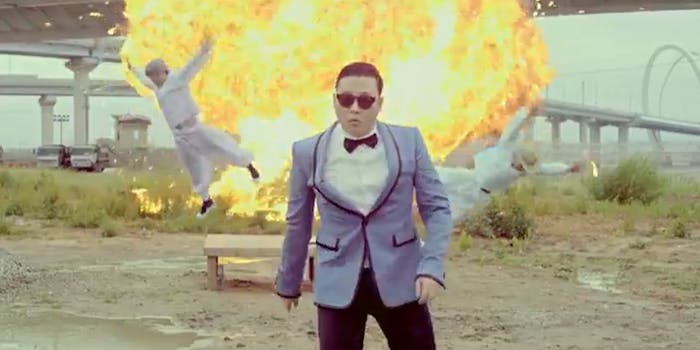 10 signs that “Gangnam Style” marks the end of the world

Sure, the world didn't literally end, but will it ever be the same after "Gangnam Style"?

The end of the world is upon us—or so the Mayans say.

Some are already taking precautions, but others are sure that it won’t happen; NASA is so confident that the world won’t end that they released a video titled “Why the World Didn’t End Yesterday”—last week.

But maybe the Mayans didn’t mean that the world would literally end. Maybe the end of the world as we know it has been right under our noses the entire time, screaming unrelentingly toward 1 billion YouTube views. Maybe the apocalypse has a name, and its name is “Gangnam Style.”

It just so happens that Psy’s “Gangnam Style,” (a topic that we’ve covered extensively) succeeded in its inevitable world domination on YouTube and became the first video to reach 1 billion views on Dec. 21, 2012, of all days.

Coincidence? We think not.

Psy already had a long career years before the rest of the world was introduced to the Korean rapper (real name Park Jae-sang) and his horse dance on a fateful day in mid-July, and the global population has been captivated ever since.

And, judging by the trajectory of Psy’s YouTube views, which show no signs of slowing down, “Gangnam Style” won’t be going away any time soon.

It didn’t take a Mayan prophecy to foretell the Psypocalypse. Here are 10 perfectly obvious signs that all of us somehow missed:

1) “Gangnam Style” spawned too many covers and parodies to keep track of.

“Gangnam Style” hit YouTube about five months ago and there’s no sign of it stopping. It went the route of “Call Me Maybe” and “Somebody That I Used To Know” and quickly spit out a number of covers. Psy turned his hit song into a duet with HyunA a couple weeks later. It’s inspired GIFs, the name of a restaurant and a Hitler rant, been mashed with other songs, and even a video deemed to have killed “Gangnam Style” did nothing to stop its momentum.

2) It’s Mom-approved—and that’s no longer something to fear.

One might think that once your parents discover something on the Internet it loses its “cool factor,” but after we taught our parents how to make GIFs and Mike Song did the horse dance with his mom to over 7.7 million views, that might no longer be the case.

3) It convinced a bunch of celebrities to embarrass themselves on national television.

Psy made an appearance on The Ellen DeGeneres Show to teach Ellen and Britney Spears the dance to various degrees of success. Since then we’ve had to endure those awkward tutorials with The Today Show, The Guardian and UN Secretary General Ban Ki-moon, among others, and he even learned a new dance along the way.

Get ready to start doing the horse dance alongside the “Macarena,” “Y.M.C.A.” and other cheesy dances at the reception, but one couple pulled a JK Wedding Entrance Dance and recruited their family and friends to turn their wedding day into a viral hit.

5) It was the subject of an entire sketch on SNL.

They say you haven’t truly made it until you’ve been parodied on Saturday Night Live, and “Gangnam Style” had that honor on Sept. 15. Psy made a cameo in a sketch in which Bobby Moynihan played the rapper who danced at a hat store at the press of a button.

6) It can subdue young children.

Some parents have finally found the secret to calming their children down or getting them to eat, and while it might make things easier around dinner or bedtime, how long before it starts to subdue the rest of us?

7) Although it was clouded by scandal, it never slowed down.

Psy charmed us with a Reddit AMA (Ask Me Anything) back in October, but he has also come under fire for anti-American comments he made at a concert in Seoul in 2004. One parody of the song has gotten a group of lifeguards fired from their jobs and the Royal Thai Navy apologized for making their own version. A man in England died of acute heart failure after performing “Gangnam Style,” but no amount of controversy can touch Psy’s massive hit, although it didn’t receive any Grammy nominations.

8) It put Justin Bieber in his place.

Psy soon earned a Guinness World Record for the most-liked YouTube video in history and while Bill O’Reilly might not understand it, it only got more popular from there. Beliebers tried to stop the inevitable, but soon beat “Baby” for the most-watched YouTube video of all time, and with it being brought into the holidays, it’s only gotten more popular.

9) Even YouTube’s biggest stars fell under its spell.

Even YouTube couldn’t resist the temptation of making its own “Gangnam Style” parody. The video-sharing site recruited Psy and some of its biggest stars to perform the horse dance and lessen the oversaturation that many of us are feeling from “Gangnam Style.”

10) Did we mention it’s been viewed 1 billion times?

“Gangnam Style” got more views in less time than some videos that have been on YouTube since the very beginning. End of the world or not, that’s an impressive feat. Can we please stop playing it now?