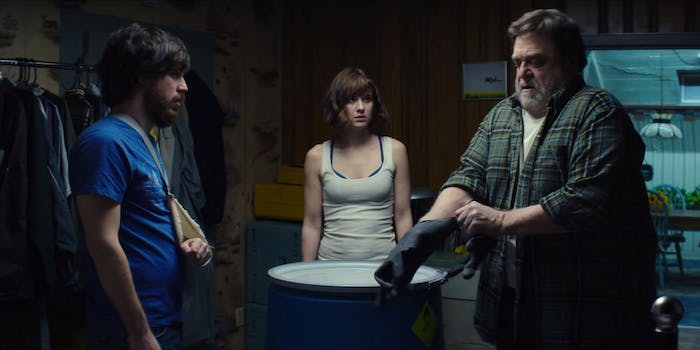 Nobody was expecting this movie.

It’s not often that a musician drops a secret album on their fans, and it’s even rarer for a filmmaker to reveal a secret movie. But that’s exactly what J.J. Abrams’s production company Bad Robot did on Thursday.

Paramount and Bad Robot released a trailer for 10 Cloverfield Lane, a movie that nobody had heard of before. It was attached to 13 Hours: The Secret Soldiers of Benghazi and appeared online Thursday night. Buzz and speculation quickly held that it was a sequel to Abrams’s 2008 film Cloverfield, particularly since the first trailer for Cloverfield was released in a similar, secret manner.

While Abrams shot down the idea of a straight sequel, he did confirm the two movies were related.

“The idea came up a long time ago during production,” Abrams told Collider. “We wanted to make it a blood relative of Cloverfield. The idea was developed over time. We wanted to hold back the title for as long as possible.”

Even without its ties to Cloverfield, 10 Cloverfield Lane manages to ramp up the suspense in seconds. John Goodman, Mary Elizabeth Winstead, and John Gallagher, Jr. are all in a bomb shelter of sorts, protecting themselves from whatever is outside, but tensions quickly rise as one of them tries to escape—a decision she’ll likely regret.

10 Cloverfield Lane will be released on March 11.