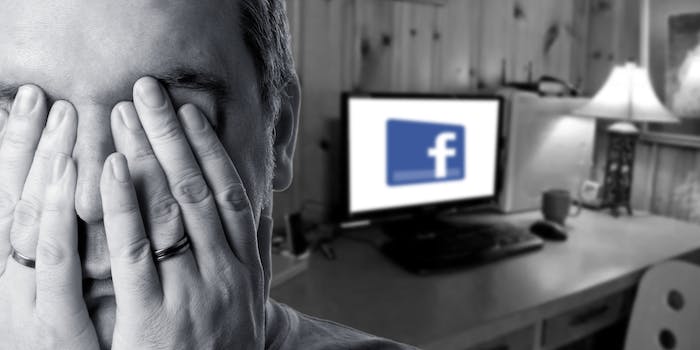 We've all been there: that Sour Sally who keeps posting negative comments on your feed and everyone else's.

A friend I used to be close with but who now lives far away has been making Facebook comments that make me worry about both her and our friendship. Her most recent offense was on a cute picture I posted of my dog. She pretty much said, “Hey, you’ve had that dog forever, how long do those dogs live anyway?” Who asks that? Occasionally I’ll notice a spree of her posting comments in a similarly rude vein on our mutual friends’ Facebooks too. It’s hard to quantify exactly what’s wrong with them, but they’re consistently undermining and negative.

She’s having a rough time now, and I know that, but I don’t know how to let her know that she’s sharing her sadness with other people through these little comments. She is generally well-intentioned, but also not very self-aware. If we saw each other regularly I feel like I could set some easy boundaries with her, like, “Hey, that thing you just said was well intentioned, but came off judgmental and hurtful”—but I’m not sure how to do that in Facebook comments. Should I just give up and deal? 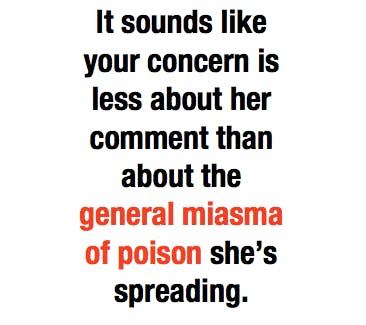 I am usually a big proponent of just disinviting people from your social media party if they insist on being a drag (or a scoundrel, or a fight-picker, or any of the many types of person you wouldn’t invite to dinner). But this is a formerly good friend going through a bad time, so even if her downer comments are exhausting—and they do sound exhausting—she deserves more than a summary unfriending or a custom filter. You could tell her privately that she has hurt your feelings, but it sounds like your concern is less about her comment on your dog (who is FINE and will LIVE FOREVER, by the way, because DOGS NEVER DIE LA LA LA) than about the general miasma of poison she’s spreading, and what that might mean about her mental state and the future of your friendship.

Instead, why not address the pattern you’ve just described? Send her a private Facebook message saying, “Hey, I notice that a lot of the comments you make on our friends’ statuses sound really negative. Are you OK? Do you have enough support for what you’re going through?” You don’t need to be the one to offer this support—if your friendship is mainly in the past, that’s not your role. But it’s worth reaching out, for old time’s sake, both to genuinely make sure she’s getting by and to alert her that her snipes are not flying under the radar. If she is an un-self-aware person, she may not have even noticed how much her inner turmoil is leaking out onto her friends’ timelines, and a nudge could prompt her to rein it in.

Or not. Maybe this is just the way she chooses to engage, and nobody but her and her therapist will induce her to change. In which case, all you can do is decide how you want to relate to it—taking her gently out of your social circle; or smiling indulgently, rolling your eyes, and saying “oh, that’s just Mary” every time she spits toxins on your feed.