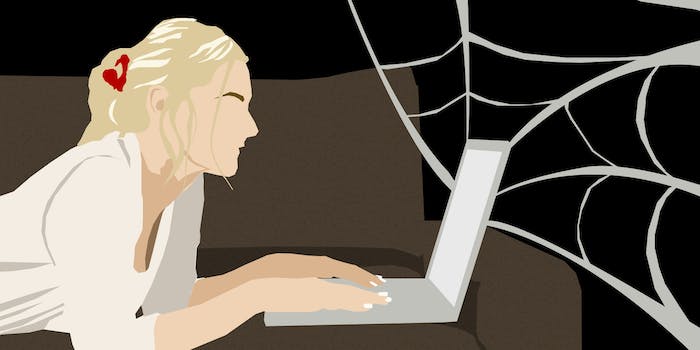 My coworker’s boyfriend was a little more friendly than expected when I met him at her birthday party. I was polite but barely talked to him. After the party, he immediately friended me on Facebook. I friend everyone so I accepted his request, and now he seems to comment and respond to everything I post. It’s hard to tell if he’s just friendly or FRIENDLY. Basically I’m ignoring him and his comments because it feels like he’s being skeezy. Am I being paranoid? Essentially, how do you distinguish OK FB touch vs. not-OK FB touch?

Hey, listen, if you feel like he’s skeezy, that’s skeezy enough for me. If someone’s making you uncomfortable on your own Facebook page, you are within your rights to put the kibosh on it, even if they have the best of intentions. The only variable is how strong you want to be in your objections.

Can you get a sense, from looking at this guy’s Facebook activities, whether his status quo is to be extremely involved in social media? If he regularly has 50-comment threads or multiple friends posting on his timeline every day, then the worst-case scenario is that his offline life is a little impoverished, and the best (and probably most likely) case scenario is that he just really enjoys socializing online and is a little indiscriminate about whom he involves. 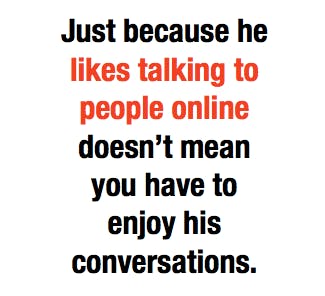 But just because he likes talking to people online doesn’t mean you have to enjoy (and get involved in) his conversations. The simplest solution is this: Next time you make a post on Facebook, click the drop-down menu to the left of the “post” button. Right now it probably says “Friends,” because your posts are probably set to be visible to your friends and only your friends. But you can change it to “custom,” and one of the “custom” options involves excluding specific people. It won’t be visible to others that you’ve excluded him, and it will just gain you some well-earned silence. (Facebook will treat it as the default privacy setting for the rest of your posts until you change it.)

Alternately, if you’re not Facebook friends with his girlfriend or have reason to believe it won’t cause any work drama, go ahead and un-friend him. He might not like it, but who cares? You get to manage entry to your Facebook feed in whatever way you prefer. If he notices, tell him ‘I decided I prefer to interact at this level only with people I know well.’ If he objects to that, well, then that just confirms he’s kind of a douchebag.

On the other hand, if this guy isn’t a social media chatty Cathy and seems to be targeting you specifically, that’s more puzzling—and concerning. In this case, quietly blocking him from your posts is probably the best approach, since his girlfriend is a co-worker rather than a friend. If you were close to her, though, you would be fully within your rights to say privately, “Hey, Bertram sure comments on my posts a LOT.” (His name is Bertram, right?)

The best approach would be to just ask about it, not presenting it as a topic of definite concern. She may share your confusion, or she might be able to shed some light on his particular social goals.

You could also talk to him about it—but that’s trickier, and runs the risk of turning a relationship really awkward, due to nothing more sinister than a differing approach to social media. Unless you feel threatened, the best approach is probably to let him interact however he likes with whoever’s willing to tolerate it, and just remove yourself from that group.

I’m looking for a new job but don’t want my boss to know. I WOULD post something to Facebook and Twitter asking for help/leads, but I’m friends with a bunch of my coworkers and my Twitter is public. My boss has a tendency to stalk us online, too. What should I do?

At my college, they used to tell new graduates and almost-graduates “network or not work.” I graduated in 2001 (I’m old!), so they weren’t talking about Twitter—they were talking about the thing we used to do before Twitter (I know, right?), where we let individual, relevant people know we were on the market and then waited for them to call in whatever cavalry they wished to muster.

In other words: If you have lots of friends in your chosen field, which it sounds like you do, tell them individually what you’re looking for and let them shake the trees. A “my very talented friend Mabel is looking for a copywriting job” tweet (your name is Mabel, right?) runs very little risk of being seen by your boss, unless he or she is a dedicated enough webstalker to engender concerns about his or her commitment to the job. And if you choose right—i.e., friends with more connections or more followers than you have—it could be more effective, too. Worst-case scenario, they send you some job listings you could have found yourself, and you at least get to feel like someone is cheering you on.

Much like David Foley in this sketch, I can be quite sarcastic when talking to friends, relatives, or even inanimate objects. However, when I’m online, I find that my sarcasm just doesn’t translate that well. My snark is either ignored or misunderstood so badly that I get reactions that are completely the opposite of what I intended. I’ve thought about adding something like “*sarcasm*” after each comment, but that would explain the joke away, rendering it moot. Emoticons are not effective in this situation, either. Do you have any suggestions about how I can be more effectively sarcastic on Facebook or Twitter, so as to further alienate myself from everybody else? 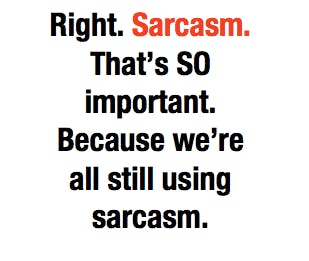 Right. Sarcasm. That’s SO important. Because we’re ALL still using sarcasm. We TOTALLY have not moved on to other forms of expression, because it is completely the ’90s right now.

I guess I’d recommend the use of caps lock for sarcasm. But it’s important to remember that nobody’s going to get all your jokes—if you’re only having a portion of your audience misunderstand the sarcasm every time, and everyone else seems to appreciate it, just shrug and acknowledge that your genius may not be fully appreciated in your lifetime.

If, on the other hand, you’re reliably going over the heads of everyone you talk to, consider that perhaps you’re going under their heads instead. Sarcasm is easy to do lazily and hard to do well, whatever ‘90s teen comedies might have told you. (They secretly sucked at sarcasm anyway. Seriously, go back and watch some of those, and see if you don’t cringe at the eye-rolling, “Yeah, Becky, I so care” ‘tude.) The key is in being just the right amount over the top. Not so little that without inflection you read as sincere, not so much that your joke gets lost, but just enough that reasonable people go, “Wait, can s/he be serious??” and then look again and realize that you can’t. It’s a tough balancing act!

The best example I can think of on the internet is the Tumblr “Here’s That Bad Advice You Were Hoping For,” which sarcastically offers advice column letter-writers (hey, that’s you!) the answer they secretly or not-so-secretly want to hear. If you take lessons from the archives of That Bad Advice and people are still mistaking your sarcasm for genuine sentiment, either you are fundamentally bad at sarcasm or you need new friends.

Jess Zimmerman has been making social blunders on the Internet since 1994. Most of her current interpersonal drama takes place on Twitter(@j_zimms).