How to weather a social justice obsession in a prolific poster.

A young, idealistic friend of the family has gotten really into social justice activism thanks to Tumblr. It makes her extremely difficult to talk to, because she’ll rush to comment on how your Facebook posts are “problematic” or whatever (asking what books people are reading demonstrates education privilege, not digging Pacific Rim makes you racist and Eurocentric, that kind of thing). It sucks the air out of the room at best, and at worst really pisses people off—if you argue with her, she’s liable to tell you that your opinion doesn’t count because you’re white, educated, male, straight, “allosexual” (I had to look this one up—it means not asexual), or whatever she thinks applies at the time. She alienates a lot of people who generally agree with her and could add to her experience, and she’s occasionally really embarrassed herself (like lecturing a friend of mine on Facebook about how her critique of Obama demonstrated white privilege, without realizing the friend is black). I’m glad to see her taking an interest and having a cause, but I’m also ten years older than she is and kind of want her to shut the hell up until she gets some perspective. Is there a way to say this so that she’ll actually hear me?

You don’t say how old you and she are, just that you’re a decade apart, but I think your absolute ages make a difference here. Call me ageist—I’m sure your friend would—but I think there’s a significant difference between acting like a bit of an asshole as a teen, as a twenty-something, and as an adult. For certain values of “asshole,” of course; I’m not going to make exceptions for people being virulently racist, misogynist, xenophobic, or whatever just because they’re only 18. But cloying, intense, blisteringly earnest idealism? Young people invented and perfected that, and people over 25 invented looking back on it and feeling mildly ashamed. 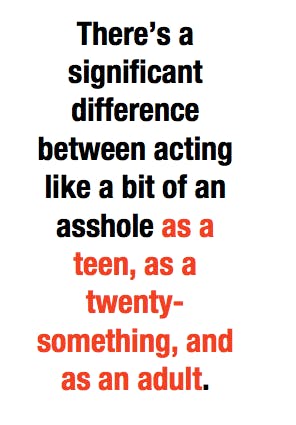 So here’s my ageist advice:

If she’s between 12 and 20, encourage her to seek out sympathetic teachers or join activist groups at her school or other local organization. At this age, every belief is deeply-felt to the point of obnoxiousness, so you’re actually incredibly lucky that she’s latched on to social justice—something that will eventually make her a better person and potentially help her make the world a better place, instead of beliefs like “I will never deserve love unless I can stop eating entirely,” “I have latent psychic powers and will force long explanations of Tarot symbology on everyone I meet,” “Only Harry Styles understands me and I must make him my boyfriend or die,” etc. But it’s important that she have some kind of guide so that she doesn’t go off the rails. Tumblr is very much the young leading the young, so things get messy. An adult mentor or group leader can help her figure out how to care deeply about issues without alienating people or putting her foot in her mouth, and how to channel her passion into real-world action.

If she’s between 20 and, say, 28 or so, load her up with books or book recommendations. At this age she’s a little too old for direct guidance, and likely to balk at it anyway. She has to start figuring things out for herself. Exposing her to excellent activist work serves a few purposes: She’ll have some models for how to express these ideas in ways that are effective, she’ll see that social justice wasn’t invented by Tumblr, and she’ll become aware of how much these works contradict each other. Flooding her as much as possible with books that are all great but not philosophically monolithic will show her that there’s more than one way to be an activist, and that she doesn’t need to scold people she thinks are ideologically impure.

If she’s too much older than that, man, just face it: your friend might be a bit of a douchebag. There’s a difference between youthful enthusiasm and steamrollering people. Sigh, do damage control, block her from sensitive Facebook threads if you have to, and just hope she’ll mellow out or jump on the next big Tumblr trend.